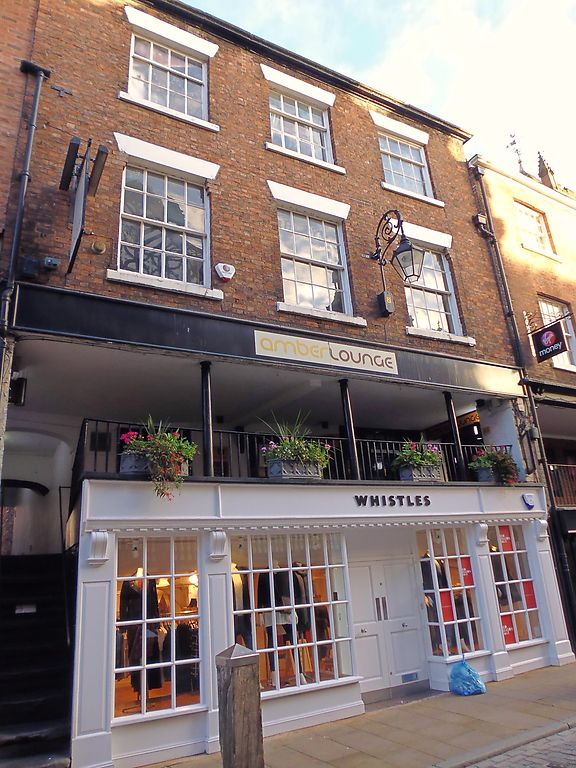 Undercroft and town house, now undercroft shop and public
house. Undercroft probably mid C14; structure from Row level
upward rebuilt early C17 and refronted early C19. Sandstone,
timber frame and brown brick, with grey slate roof.
EXTERIOR: modern shopfront of varnished wood and glass to
undercroft; flight of restored stone steps to Row. The Row
front has painted brick end-piers with 3 intermediate slender
Tuscan cast-iron columns; simple square-section cast-iron
railing; the pub facia hides the bressumer; a central console
bracket carries a cross beam over the Row; door of 2 panels;
two 4-pane flush sashes; rear passage, far left. The third and
fourth storeys are of Flemish bond brickwork with three
16-pane recessed sashes to third storey and three 12-pane
unequal sashes to fourth storey, with painted stone sills and
wedge lintels; painted cornice. The roof, hipped to front, has
ridge at right angles to street. The full-width rear gable end
has replaced windows, some cambered window-heads, an oak beam
on a large post to west over the rear passage, on oak tie-beam
to the gable truss, a large east lateral chimney of old brick
and a smaller west chimney.
INTERIOR: the undercroft is 8.8 metres wide, with sandstone
rubble walls. The rear stair formerly to Rows level was
probably inserted later. A central timber arcade of 4 bays
from front to back, now partly damaged, has samson posts of
massive scantling, one replaced in brick, one duplicated in
brick and one duplicated in timber, carrying an arch-braced
bridging joist on which the arch-braced cross-beams, slotted
for joists and supported at their outer ends on recent nib
walls, are halved.
At Row level much of the probably C17 timber frame is
concealed by modern surfacing. The east party wall contains
large timbers, and has an early open-well stair with an
adjacent inglenook to the rear; the stair has pierced-vase
splat balusters; the steps are covered. On the third storey

there is framing of large scantling at front of the eastern
front room, an early C18 corner chimneybreast, a moulded
plaster beam, and in the rear room a fireplace against the
east wall which has a mantel on corbelled stone piers and a
plaster overmantel with the Royal arms flanked by the Corbett
arms surmounted by a frieze with sea-monsters similar to that
in No.53 Row (qv).
(Chester Rows Research Project: Brown AN & Grenville JC &
Turner RC: Watergate Street: Chester: 1988-).