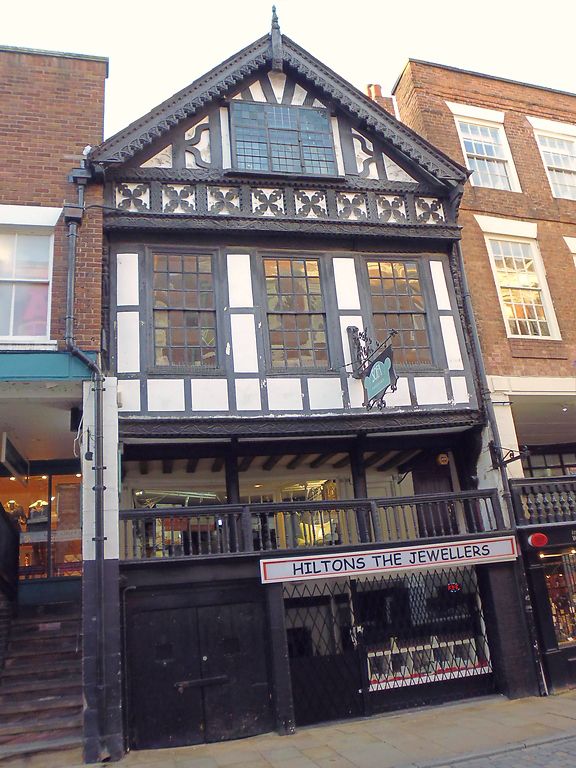 Undercroft and town house of the Leche family, now undercroft
shop and shop at Row level and above. Undercroft and lower
part of chimney late C14; rear extension of undercroft, oak
timber framing and roof trusses of the house late C15;
extension of front chamber over the Row, rear extension and
internal improvement C17; minor C18 alterations. Sandstone and
brick at street level; timber frame with plaster panels above;
grey slate roof.
EXTERIOR: 3 full storeys including street level and Row, plus
attic inserted in front gable.
Boarded double doors to street, left, and modern shopfront and
pier; right; the present street front projects beyond the
early C17 encroachment visible from Row level upward. 3 posts
(formerly 4 - that to left is rebuilt in stone and brick)
formerly rose from street level; they carry carved console
brackets to jettied bressumer and frieze with dentils and a
running pattern in relief of grapes and vine leaves. Front
rail to Row on column-on-vase wooden balusters; shopfront in
earlier C20 manner inserted in early C19 surround with reeded
pilasters; a door of 3 vertical panels, right, to passage to
rear and to No.23 Row (Lion House) (qv). The small-framed
third storey has corner posts carved with figures and
decorative patterns; 3 flush sashes with thick glazing bars
have date 1736 scratched on glass. The jetty beam above the
sashes is surmounted by a row of 8 panels with shaped saltire
braces. The gable has a slightly jettied tie-beam, small
framing with curved braces and some pargeting, a mullioned and
transomed attic window with leaded glazing inserted later C17,
cusped and ornately carved bargeboards and a shaped bargepost.
Rear elevation: the timber frame is largely concealed by
plaster. Each of the 2 storeys of the main gable-end has an
irregular 5-light mullioned and transomed window, the upper
window leaded. The small rear courtyard is flanked to the east
by a narrow wing which contained a passage linking the house
to No.23 Row (Lion House) which stands on the probable site of

the former kitchen of Leche House. A narrow room, the "Lady's
Bower" over a covered way with a column of Ionic derivation
and a replaced corner post flanks the west side of the
courtyard; the Bower has leaded mullioned windows.
INTERIOR: the late C14 undercroft, 14.6 x 5.8m, has ashlar
sandstone walls; the east wall steps forward to carry the
chimney stack above. The deeply moulded bressumer 1.4m behind
the present shopfront has mortices for the posts of the former
close-studded front. Massive braced beams on stone corbels
carry the ceiling of 5 equal bays; the 2 to the rear are
partly hidden by the brick barrel-vault inserted, probably
C18, over the late C15 rearward extension. The undercroft is
now linked to those of Nos 15, 21 and 25 Street (qv).
The former town house at Row level and above, now wholly used
as a shop, contains from front to back a small former shop
with a chamber above former shop and Row, an open 2-bay hall 2
storeys high set at right angles to the Row, with a gallery
above the passage along its west side, the bay for the former
screens passage and stair, a parlour with a substantial
chamber above facing the small rear courtyard flanked on the
west by the Lady's Bower over a covered way and on the east by
a closet over the former passage to No.23 Row (Lion House).
The front chamber, heightened and extended forward C17 and
ceiled with an attic floor c1730, has a raised plaster
strapwork frieze visible at the north-east corner. The hall
has a late C14 chimney-breast on its east wall with an early
C17 overmantel having 3 panels divided by half-columns of
Ionic derivation, surmounted by the coat of arms of Sir John
Leche; a partly plastered false hammer-beam central truss with
a substantial C17 chandelier pendant; the other trusses are
king-post; the timber-framed gallery with shaped splat
balusters gives access to the front and rear chambers; access
to the former screens passage bay is from the through-passage
beneath the gallery; some oak small-panelling; the stair to
gallery and rear chamber was replaced and repositioned behind
the screens bay, probably C18. The rear chamber above the
parlour has C17 plasterwork in truss panels: in north truss 2
winged horses with a Maltese cross in a shield, in a pattern
of fruit and foliage; in south truss a pattern with human
heads, crowns and roses. The closet above the Lion House
passage has a panel above its north doorway with a lion
rampant on a shield flanked by damaged fleur-de-lys; at south
end Prince of Wales feathers in the Garter, flanked by
fleur-de-lys.
(Bartholmew City Guides: Harris B: Chester: Edinburgh: 1979-:
107).