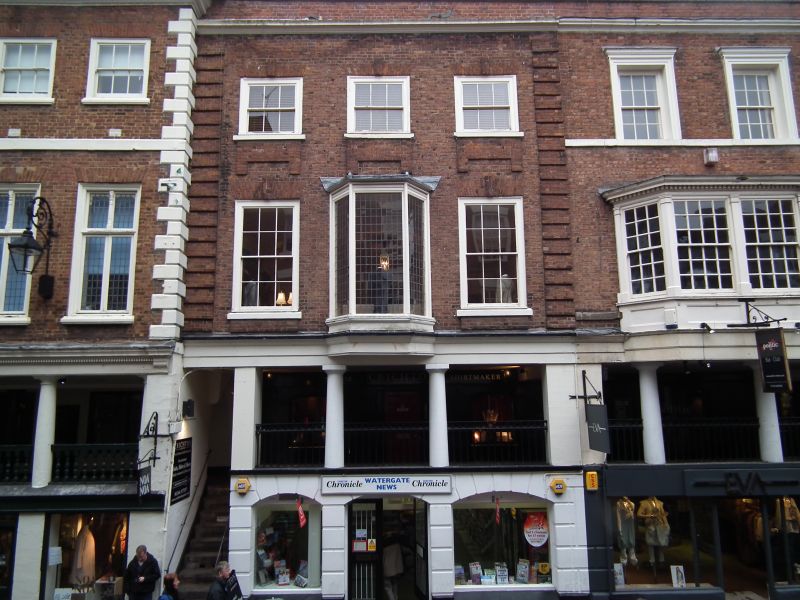 Undercroft and town house, now shop and offices, the offices
vacant in October 1991. Mid C13 party wall with No.28 Street
and Row (qv), otherwise c1710 with later alterations.
Sandstone, brick, grey slate roof.
EXTERIOR: 4 storeys including undercroft and Row. 3
segmental-arched openings to street, in painted rusticated
stone wall, containing a modern door at centre and a simple
shop window to each side; a flight of 10 steps to the Row,
west. The Row has rendered end-piers with 2 intermediate
columns of Tuscan derivation; cast-iron railings with
round-arched heads carry a double rail separated by roundels;
door of 6 fielded panels in pilaster doorcase, with a
camber-arched fixed-light window of 3 panes to each side, in
rendered wall. Rendered Row bressumer; banded brick quoins to
third and fourth storeys; a central canted oriel to third
storey has leaded glazing; a 12-pane flush sash in wall to
each side, with a raised brick panel carrying a painted stone
sill and a gauged brick flat arch; the fourth storey has 3
replaced 6-pane flush sashes with painted stone sills above
dropped brick panels and gauged-brick flat arched heads;
stone-capped parapet on moulded cornice.
The rear has a doorway with a cambered brick head, two flush
12-pane sashes to the storey above. Three 4-pane sashes to the
top storey, one inserted.
INTERIOR: the undercroft, probably altered at the front, has 2
probably early C18 barrel vaults to the rear; the structure is
concealed by removable light cladding. Total width of the
undercroft is 7.6m. At Row level and above the plan is double
pile, with 2 main rooms at front and 2 at rear; there was no
shop. The C13 stone west party wall to Booth Mansion is partly
exposed. The rear room inglenook has an oak bressumer; oak
panelling to the front room has a row of panels below the dado
and a tall row above; oak cornices; early C18 open-well stair
has slender barleysugar balusters on vase plinths, swept oak
rail and spiral curtail. The softwood stair to the fourth
storey is probably later C18. In the third storey there is a
plastered timber beam, probably late C17, a C18 cornice and

panelled embrasures, a 6-panel door to the front room and a
4-panel door with original brass hinges and furniture, 4-panel
doors to the 2 west rooms; the front room is panelled with a
contemporary cornice and a fireplace with overmantel of one
panel; a double doorway has been cut through to Booth Mansion.
The party wall has a stringcourse. The fourth storey has a
1-panel door, later 4-panel doors and simple C18
large-panelled window embrasures.
(Chester Rows Research Project: Brown AN & Grenville JC &
Turner RC: Watergate Street: Chester: 1988-: 32).