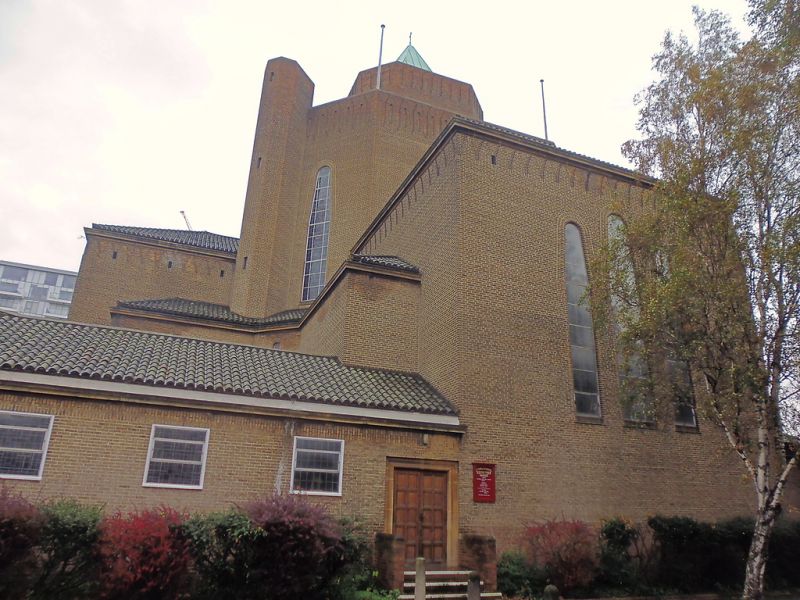 Roman Catholic Church. 1951-4 by Adrian Gilbert Scott as part of the 'Live' architecture exhibition of the Festival of Britain. 2" Leicestershire brick construction with concrete vaulting, while short concrete spire is carried on steel plate girders over 18m long. This has a copper roof, the lower roofs with Lombardic tiles. Greek cross plan with central lantern, and liturgical east end with forward baldacchino faces west. Liturgical west gallery. The style of the church is inspired by its camel vaulted arches, a motif inspired by older brother Giles's unbuilt designs for Coventry Cathedral made in 1945 and derived from ancient Persia via buildings like Clemens Holzmeister's Vienna Crematorium of 1922. It has also been described as `Jazz Moderne Byzantine'. Stepped profile, with moulded brick banding to cornices at each of the 3 main levels, and strong eaves or parapet mouldings. Tall aluminium windows, most distinctive of which are those placed in the splays of the composition. Projecting porch to Upper North Street with camel arch opening, behind it a bellcote over narthex within.
INTERIOR: narthex/nave, transepts and sanctuary of equal length with splayed sides to high central crossing. Sanctuary paved in marble and with baldacchino, sacristies to either side - the priest's sacristry converted to weekday chapel in memory of Canon John Wright, parish priest 1946-70, in 1979. Pulpit of Hornton stone placed across one of the splayed angles of the central space and raised about 3.7m above floor level. Altar to Our Lady is a memorial to Canon Bartholomew O'Doherty, parish priest 1920-46 with life-size statue of the Madonna and timber reredos. Octagonal font also in Hornton stone at liturgical west end. Above is choir gallery, originally also containing the organ but this has been brought down to the nave. Pews have been reorganised to reflect liturgical changes, though the lack of alteration required shows how liturgically advanced was Scott's Greek cross plan. Around the inside walls is a dado of Blue Hornton stone, which incorporates stone reliefs of the Stations of the Cross by Peter Watts. Stained glass by William Wilson of Edinburgh. Scott himself donated the light pendants, which were to the same pattern as those he designed for the rebuilding of the House of Commons. Regarded as old fashioned when it was built, SS Mary and Joseph can now be appreciated for the handsome quality of its workmanship, materials and design. Its massing is among the most ambitious and satisfying of any post-war church, and it is now recognised as Adrian Scott's finest church designed independently of his brother. The Survey of London (1994) points to the special care with which every element was designed. In addition, as one of the very first Roman Catholic churches designed after the Second World War it is remarkable for a plan-form which from the first was designed to allow all the congregation to be close to the altar, and which anticipated many of the ideas of De Sacra Liturgica in 1963. In 1981 Lord Esher confessed that `the fortress like Catholic church that once seemed so old-fashioned is now so functional' and recognised the building as an important local landmark (A Broken Wave, 1981, p.120).
(Sources: Architects' Journal: 15 June 1950-:749; Architect and Building News: 24 December 1953-:774; Architecture and Building: September 1954-: 330-5; Architectural Review: October 1954-: 263-4; Lionel Esher: A Broken Wave: 1981-: 120; Survey of London; vol. XLIII: Poplar Part One: 1994-: 236-9)