The Shire Hall and Corn Exchange

A Grade I Listed Building in Woodbridge, Suffolk 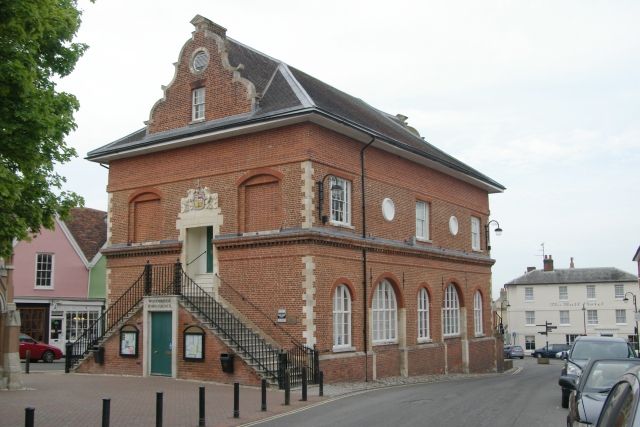 GI
Considered to have been built circa 1575.An extract from Loder's Terrier of 1792 statesthat "Mr Seckford built...tile Sessions Hall at woodbridge(the Quarter Sessions being removed from Melton,where it was formerly held)giving the upper part of it for the use of the County for ever." The building is J storey,with stone coped Dutch gable end crowned with a small pediment,The former Corn Exchange which was open arched has now been bricked up and sash windows inserted.The walls are red brick,moulded cornice at first floor level,and band about three feet under eaves.Stone plinth end stone dressings finishing below band,and the flatter pitch of the main roof span to that of the gables at each end,and the difference in the brickwork above the band seem to indicate that an earlier roof existed,and that in general the present appearance with the stone steps and railings giving external access to the Shire Hill on the east end west ends,are of the latter apart of the C17.On the east end are two plaster lined niches,and on the north and south sides,two bull's eye plastered panels with a bullseye in each sable,the eastern one now having a clock face.A possible clue the suggested later reconstruction exists in the two Seckford Coats of Arms On the east end is one in wood which shows the crescent in the centre of the quartering,indicating the position of Thomas Seckford in the family,but on the west end the stone coat of arms built into the Structure omits this detail.There is a record that the west end of the Market Fall was leased for fifty years from 1817 as a Fire Station.Ancient monument.NMR photos.All listed buildings in Market Hill form a group around Shire Hall.