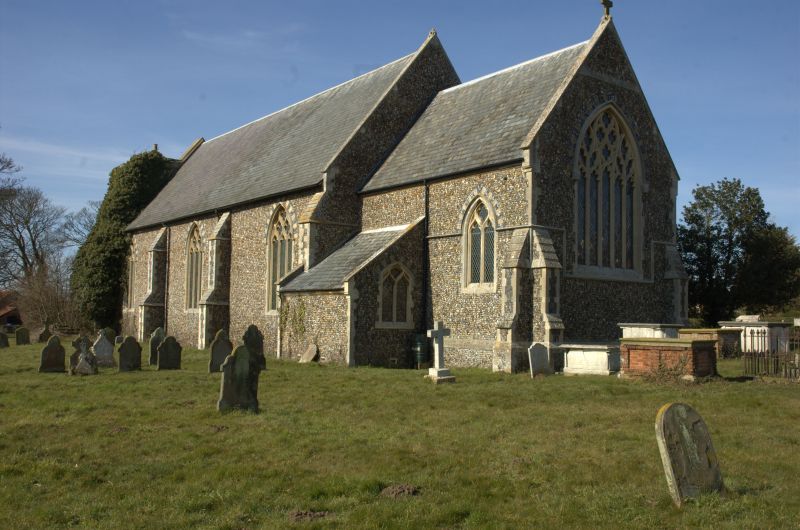 ALDERTON (Off) THE STREET
TM 34 SW
10/7 Church of St Andrew
16/3/66
G.V. II
Church. C14, C15 and C19. The chancel rebuilt in 1862 and the nave
restored and re-roofed in 1864 by A W Blomfield. Knapped and rubble flint
with brick and ashlar dressings and slate roofs. West tower (ruinous),
nave and chancel, north western porch and south-eastern vestry. Tower:
C15. Most of the facing stone has now gone. West front; projecting plinth
with moulded ashlar offset to its top. Diagonal buttresses which have now
almost entirely lost their outer faces. Vertical ashlar dressings remain
to the inner angles. Richly moulded door surround to the centre of ashlar
with wave, ogee and roll mouldings and hollow chamfer above which is a
hollow chamfered hood mould with miniature square flower bosses. Similar
rectangular surround above this enclosing ashlar spandrels which have
shields within circular, cusped panels. Daggers to the angles. Above this
are the remains of an arcade of flushwork with trefoil heads, the ashlar
surround having mostly disappeared. String course above this on which
rests a tall Perpendicular window with chamfered and wave moulded ashlar
surround, the tracery having now all disappeared save for stubs at the
springing of the bars. South face: blank with a C19 buttress at right of
ashlar dressed flint rubble with knapped flint to the outer face. North
face: similar. East face: abuts the nave to the level of the ridge and has
been mostly rebuilt in the C19. The upper stages of the tower have now
fallen and a late C18 print shows it to have had a further 3 windows to the
northern and southern sides and a battlemented parapet. Nave: North face:
porch to its right which has diagonal buttresses to the corners which die
back by 2 offsets. Deep plinth running around the body Qf the porch.
Slightly projecting lower plinth with facings of knapped flint, now
partially replaced with rubble flint. This dies back via an offset to the
upper level of the plinth which has square panels of flushwork showing
crowned initials, shields, mouchettes within a circle and 4 circles within
a circle. This, too, dies back by a moulded offset. Above this on the
north face and continuing across the inner flanks of the buttresses and
their outer faces are arcaded panels of flushwork, those with rounded heads
containing crocketed ogee arches; those with trefoil heads being blank.
This arcade continues around the buttresses and across their outer faces.
Similar arcade above to either side of the doorway. This doorway has a
richly moulded ashlar surround with colonnettes to the outer edges and
jambs, with moulded capitals and bases. The arch has casement mouldings,
keel and wave mouldings. Moulded rectangular surround above enclosing the
spandrels which show a man with spear at left and a crouching dragon at
right. Above this is a further arcade of flushwork panels, now much
weathered but originally having 3 canopied niches to the centre of which
the lateral ones survive with buttressed shafts to either side and canted
ledges but now infilled with rubble. The ledge and left hand shaft are all
that remain of the central niche. Shallow gable above, now rebuilt in
rubble flint and brick, with an ashlar coping. The right and left hand
flanks have central windows with 4-centred arches and moulded ashlar
surrounds originally containing tracery but now blocked. The walling here
is a mixture of knapped flint set with small square ashlar stones. Nave
walling at either side consists of knapped flints set between bands of C15
bricks and tiles with some rubble replacements. where the wall has been
patched the bricks and tiles have disappeared. To left of the porch are
two C19 windows with reticulated tracery and voussoirs of radiating bricks
between which are panels of knapped flint. Buttresses to centre and
extreme left. South face: 3 windows with reticulated tracery similar to
those of the north face with C19 buttresses between and to extreme right
and left. The walling here appears to have been entirely replaced c.1864.
To left is a doorway with richly moulded C19 ashlar surround of wave and
keel mouldings and similar brick voussoirs. Chancel: north side;
buttresses to left of centre and extreme left. 3-light windows to right
with reticulated tracery. Priest's door to centre with moulded ashlar
surround. South face: projecting lean-to vestry at left with blank wall at
south and 2-light window to the right flank with ogee trefoil heads. To
right of the vestry is a 2-light window with ogee-headed cusped lights.
Buttress to extreme right. East face: buttresses at far right and left.
String course at the level of their dying which runs across the wall face
and dips to the centre to form the sill of a 5-light window of Decorated
tracery with cinquefoil heads to the lights and quatrefoils and mouchettes
to the apex.

Interior: porch: church doorway with wave and keel mouldings. Nave: roof,
C19, pine. Nine bays of which every third truss has wall posts supported
on corbels. Chamfered tie beams. Central king posts and cusped arch
braces connecting to the collars from which spring king posts with angle
braces. The subsidiary trusses are similar save for the absence of wall
posts or tie beams. Piscina to south eastern corner with ashlar surround,
now mutilated but originally cusped. Above this, to the left hand reveal
of the south eastern nave window is a niche with crocketed gablets to 2
sides and miniature vault. Blocked doorway with ashlar surround to eastern
end of the northern wall. Chancel: the roof is boarded with one truss
which has cusped and pierced arch braces springing from stone corbels which
rest on black marble posts sitting on square lower corbels. Memorial of
1910 to Charles Goodwyn Archer, rector of the church, recording the
rebuilding of the chancel and restoration of the nave and the dates of the
work. Although either dilapidated or heavily restored the church retains
elements of a significant Perpendicular building but as The Builder noted
in 1865, the church had been restored and rebuilt "to such an extent that
it may be said to be rebuilt." The porch is similar in form and details to
that at the Church of St Mary, Ufford, which is more complete.