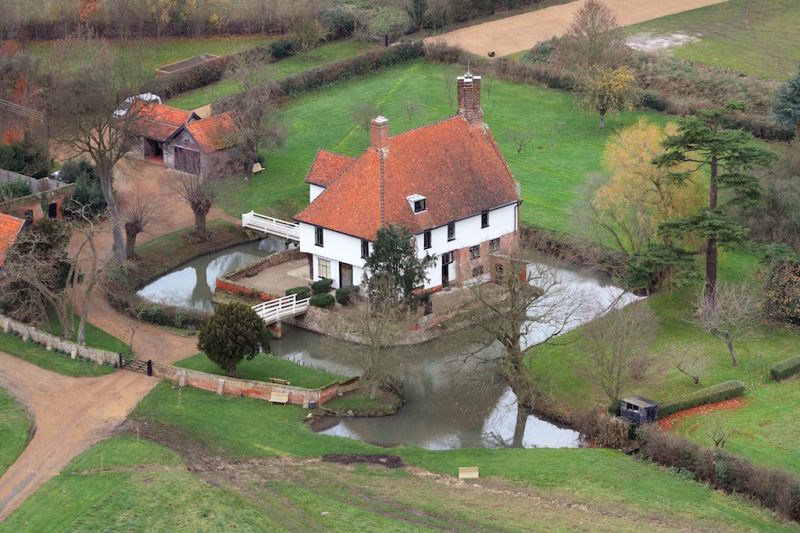 House, formerly hunting lodge. C16 with later additions and alterations.
Timber framed with colourwashed render and a plaintiled roof. Two storeys
with an attic. South front: stucco to the ground floor, grooved in
imitation of ashlar. Massive wooden corner posts at far right and left,
jowled at their tops which have miniature arcades to their upper bodies and
fleurons. central double doorway with C20 plank doors. Three-light C19
casement to left of this. ,To the jettied first floor are lateral 2-light
casements. Hipped roof above to the apex of which is a massive chimney
stack. Right hand side: to ground floor level at left is a canted C19 bay
window with 3 central lights and 2 to each angle and, at right of this, a
3-light casement with, at right again a further corner post, similar to
those on the south front. Immediately to right of this is an extension
which has brick walling to the ground floor and a first floor which is not
jettied. This section of ground floor walling has a small basement area
with a 3-light cambered-headed window and to the ground floor two C19
three-light casements. The first floor level has three 2-light casements
extending across the whole of the front. To the attic is a 2-light flat-
roofed C20 dormer at left. To the ridge at far right is a massive chimney
stack supporting 4 diamond-section flues which have broach bases and banded
upper body. Left hand side: projecting staircase tower-wing. Slightly to
right of centre, at right of which is the earliest portion with its jettied
first floor. The staircase tower has a cross window to the ground floor at
left and a 4-light window to the mezzanine level between the ground and
first floors and a further 3-light window above this. At right there are
2-light ground and first floor windows, both of early-C19 date. To left of
the staircase tower is a lean-to with a plank door and a 3-light casement
and a further C20 lean-to at left of that. Behind and to left of it is a
ground floor window of 4-lights above a deep brick plinth and at first
floor level are three 2-light windows of varying size. North face (rear):
brick gable end with a 2-light basement window in the walling which rises
from the moat. Blank walling above save to the gable which has later 2-
light windows, one of which is partially blocked. The whole of this front
has put-log holes in the brick work, now partially filled with loose
bricks. Setback between the ground and first floor and kneelers at either
side of the gable. Massive chimney stack to the apex.
Interior: within the kitchen outshut is a moulded lintel originally to an
outside door which bears the date 1610 and the initials E.W. To the right
of this is the name J. Blandfield which may be a later addition. The
drawing room has late C16 richly-moulded ceiling beams with roll and
cavetto mouldings which continue as a cornice around the room. The sitting
room has a plain ceiling above which are two separate decorated ceilings,
now obscured. The C17 staircase has turned balusters and moulded handrail
and is of open-well plan to the lower body and close-stringed above, of 5
flights. The first floor has close-studded walls, and richly-moulded
lengthy dragon beams to three of the rooms connected to the corner posts by
short arched braces. The cross-axial gallery has one 4-centred archway and
the springing of a further, similar archway. To the centre of the northern
wall is a blocked window of 4-lights with a very richly moulded frame,
partially altered to accommodate a doorway through to the extension.
Winder staircase to the rear wing. The attic rooms have slender rafters
with staggered purlins but this masks an earlier roof which can be seen in
the loft space above which has more substantial timber but does not appear
to be earlier than the late C17.