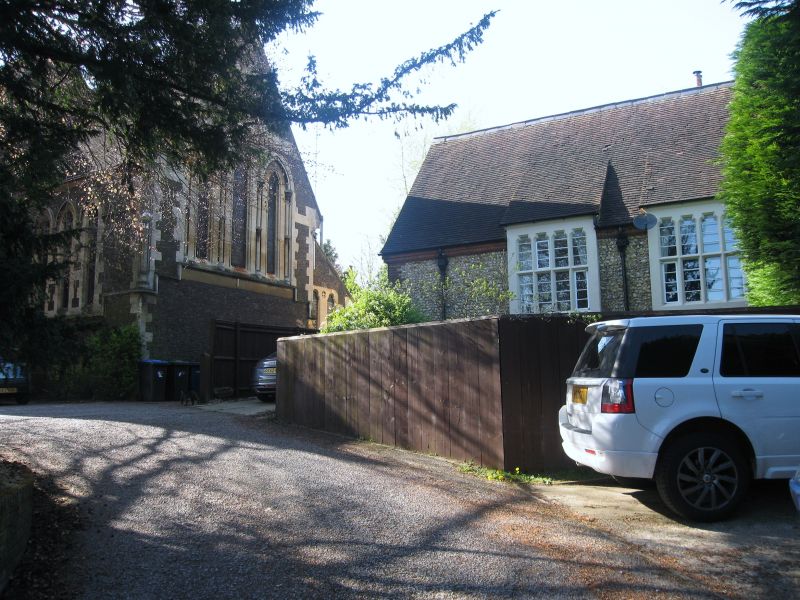 II
Former suburban church, 1876 by Henry Woodyer, converted to flats c1980. (This conversion in itself is not of special interest).

EXTERIOR: Tall, narrow 6-bay nave in Early English manner. There is no tower or fleche but gables have small gable end crosses. The north elevation of the nave rises sheer from the ground without a plinth and has single light nave and clerestorey windows in flush dressings, the latter above a shallow, continuous cill band. Between the clerestorey windows are circular recessed carved bosses in flush polygonal dressings. At the eaves is a continuous triangular shaped cornice, which is repeated throughout the church. The west end has a chamfered plinth below a large west window of five lights of flat plate tracery beneath a hood mould with figure stops and above a narrow cill band. In the gable is a small shaped opening. The aisled south elevation is similarly treated to the north elevation but with a pronounced continuous hood mould over the aisle windows and a similar triangular eaves moulding as the main roof. The pitch of the aisle roof has been modified and roof lights inserted. The entrance at the W end of the S elevation has a very restrained, simple, chamfered arched head, set within in a taller cranked arch with a simple roll moulded arris. This is in turn has flush stone dressings beneath a Bargate stone arch. The outer door appears to reuse the original ornate strap hinges. Progressing eastwards, decoration becomes richer and more three dimensional. The transept has a two-light plate tracery window; chancel windows are triple lancets beneath a continuous hood mould and a cranked continuous cill band. The east window is of three grouped lancets with moulded shafts supporting hood moulds. The south-east angle of the chancel is marked by a tall, attenuated niche, while the east end is enriched with flush bands of the paler limestone. To the north of the chancel is a small polygonal vestry and choir room.

INTERIOR: the nave has been subdivided horizontally and vertically, while stairs inserted at each end of the building provide access to the upper level flats. The inserted partitions, floors and stairs are not of special interest.

The south arcade has piers with deeply moulded capitals in Early English manner. Aisle windows are deep set within an arcade of flush rear arches, with a roll moulded cill. Some upper level window embrasures have wide rear arches with robust engaged shafts and a stone cill. Interior mouldings are also progressively richer towards the east end. The soffit of the chancel arch is scalloped, with pronounced bolster-like mouldings, doorways to vestries have cusped heads. Chancel windows have annulated (ringed) engaged shafts and cusped heads, on the east windows these are almost wave moulded. The chancel has a side-purlin roof with cusped wind braces and a king post rising from a braced collar above purlin level. The south transept has a similar but simpler roof. Although the nave roof is largely hidden, it appears to resemble the chancel roof.

FITTINGS: The chancel has been stripped of most of its fittings, and is maintained as an empty space. The reredos is said to be in situ behind protective boarding, while a pierced timber screen with coloured, leaded, glazing remains above former choir seating on the north side of the chancel. The east window by Hardman & Co depicts Christ appearing to St James, the Transfiguration and Ascension.

HISTORY: The former church of St James Farnham, built in 1876, is a late example of the work of the prolific and accomplished Surrey-based architect Henry Woodyer. As Farnham expanded, a suburban church was needed to serve the working classes. Compared with his other churches it is large, designed to seat 500, and economically built. A tower and north aisle were planned, the latter to accommodate the growing population, the former when funds permitted. The church was declared redundant in 1974 and in 1979 it was acquired by the local authority and converted to 16 flats. It was listed in 1972 before the conversion to flats.

Henry Woodyer (1816-96) was a pupil of William Butterfield and set up practice in Surrey in 1846, where he specialised in church design and restoration. Examples range from St Martha, Chilworth (1848), the rebuilding of a Romanesque chapel, through the village churches at Buckland (1860), listed Grade II, and Hascombe of 1864 (Grade II*), to the imposing parish church of St Martin, Dorking of 1868, (also Grade II*). His work is principally found across southern and central England, for example in the notable, picturesque group of buildings at Highnam, Gloucestershire, set round his church of 1849-50 (Grade I). Recently listed buildings include the former school at Beaconsfield (Grade II), adjacent to the parish church, which he restored. Domestic work included the enlargement and restoration of the C17 Evelyn family home, Wotton House, near Dorking, in 1877, (Grade II*).

Lying to the east of the St James Court, the former church school, built as part of the scheme in 1878, is also by Woodyer, in vernacular revival manner (listed Grade II).

REASONS FOR DESIGNATION
1-16 St James Court, formerly St James church, 1876 by Henry Woodyer, is designated at Grade II for the following principal reasons:
* Architectural interest: a large, economically designed church, intended for the suburban working classes, by an accomplished C19 church architect, in a quirky interpretation of the Early English style;
* Intactness: although the church was converted to flats c1980, with the loss of most of its internal fittings, the structure and architectural detail are strongly legible;
* Historic interest: Henry Woodyer was based in Surrey where his work reflects the local vernacular and historicist church traditions of the mid- to later C19, ranging from the restoration of historic churches to new churches in village and urban settings.