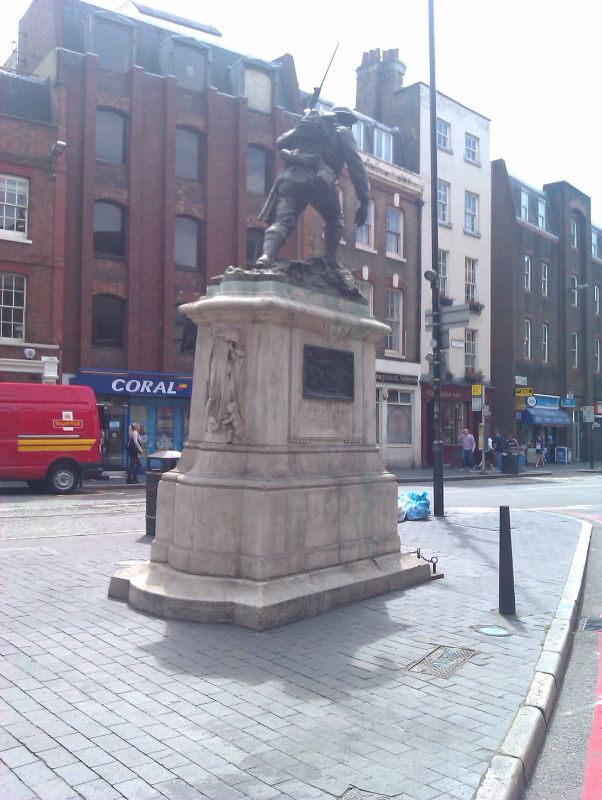 DESCRIPTION: St Saviour's war memorial is located on a paved area at the centre of Borough High Street. It is in close proximity to several Grade II-listed buildings.

The war memorial is constructed in Portland stone and consists of a tall rectangular pedestal with a deep moulded cornice and foot on a plinth atop a single-step chamfered base. The whole is surmounted by a bronze figure of an advancing infantryman in a crouching pose with bayonet-fixed rifle on his shoulder. Dress, weaponry and equipment are depicted in great detail. The north and south faces of the pedestal have convex projections with allegorical relief carvings; that to the south depicting St George and the Dragon, while that to the north depicts a mourning woman with an infant at her feet embracing a dove. The east and west faces of the pedestal have bronze relief panels depicting, respectively, a naval battle scene viewed from the gun deck of a destroyer, and an aerial combat scene. The panels combine shallow and higher relief to provide depth and perspective. Above the panels, carved in relief to the moulded cornice of the pedestal, are the coats of arms of the parish and borough.

The inscriptions are carved beneath the bronze panels on the pedestal in incised lettering. That to the east side reads, GIVE HONOUR TO THE MEN OF ST. SAVIOUR’S SOUTHWARK/ WHO GAVE THEIR LIVES FOR THE EMPIRE 1914 - 1918/ THEIR NAMES ARE INSCRIBED WITHIN/ THE PARISH CHURCH/ MAY THEIR MEMORY LIVE FOR EVER IN THE MINDS OF MEN. That to the west reads, THIS MEMORIAL WAS ERECTED BY/ THE PARISHIONERS OF/ SAINT SAVIOUR’S SOUTHWARK/ IN THE YEAR 1922.

The aftermath of the First World War saw the biggest single wave of public commemoration ever with tens of thousands of memorials erected across England. This was the result of both the huge impact on communities of the loss of three quarters of a million British lives, and also the official policy of not repatriating the dead which meant that the memorials provided the main focus of the grief felt at this great loss. One such memorial was raised by the parish of St Saviour's at Southwark as a permanent testament to the sacrifice made by the members of the local community who lost their lives in the First World War.

The parish of St Saviour, Southwark, had been absorbed into the Metropolitan Borough of Southwark in 1900, but there was strong local pressure for a war memorial commemorating those who had lived or worked within the boundary of the historic parish. The war memorial was paid for by public subscription following a competition organised by the local war memorial committee which was assessed by Sir Cecil Harcourt Smith of the Victoria and Albert Museum; the winning design was by the sculptor Philip Lindsey Clark. The figure, according to the sculptor, was intended to “express the same dogged determination and unconquerable spirit displayed by all branches of our forces on land, on the seas, and in the air” (Cavanagh, 2007). The £4,000 raised also provided for a tablet designed by Sir John Ninian Comper in the Lady Chapel at Southwark Cathedral which is inscribed with the 334 names of the fallen. Both memorials were unveiled on 16 November 1922 by General Lord Horne and dedicated by Dr W W Hough, Bishop of Woolwich. The bronze sculpture and panels were cast by M Maneti, founders.

St Saviour’s War Memorial was restored by Southwark Council in 2014.

Philip Lindsey Clark (1889-1977) was born in Brixton, London and trained first with his father, the sculptor Robert Lindsey Clark, at the Cheltenham firm of HH Martyn and Co and later at the City and Guilds School, Kennington. In the First World War he served in the Artists' Rifles and was commissioned into the 11th Royal Sussex in 1916, serving on the Western Front until 1917 when he was severely wounded, receiving the Distinguished Service Order (DSO). From 1919-1921 he resumed his training at the Royal Academy Schools. Clark was also responsible for the remarkable Scottish Rifles memorial, Glasgow, a more complex example of the ‘action’ war memorial seen at Southwark. A model of the soldier on the St Saviour’s war memorial was exhibited at the Royal Academy in 1923. In the 1930s Clark moved away from his early realist style and subject matter to religious art in the manner of Eric Gill.

St Saviour's War Memorial, which is situated on Borough High Street, is listed at Grade II* for the following principal reasons:

* as an eloquent witness to the tragic impact of world events on the local community, and the sacrifices it made in the First World War.

* a well-executed war memorial of striking composition using high quality materials and demonstrating excellent craftsmanship;
* a fine example of the work of the distinguished sculptor Philip Lindsey Clark with bronze figural sculpture and reliefs of exceptional quality;
* it is relatively uncommon with First World War memorials to feature the role of the air services in combat; by including a bronze relief of an air combat scene, St Saviour's war memorial demonstrates the growing importance of the use of aviation in combat in the First World War.