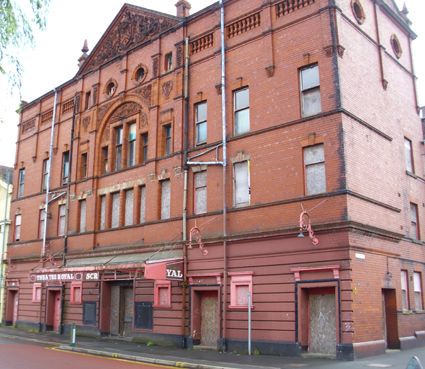 Former theatre, later cinema. 1901-2 by Campbell and Horsley of Manchester. Red brick and terracotta; some render and stock brick to rear; slate roofs. Three storeys and attics. Elaborate symmetrical frontage, nine bays wide with broad and elaborate central bay under round terracotta arch with keystone. Pilasters to either side, and central three bays have a distinguished composition with windows in terracotta surrounds to second storey, two oeil de boeufs above flanked by balustrading. Elaborate moulded and cut brick decoration in pediment, flanked by finials. Simpler short pilasters and keystones to the remaining three bays, and these features are continued on the Henry Street elevation. Sash windows in timber frames throughout. Doors under projecting ground-floor canopy blocked. Roof with lantern.

Interior: Substantially intact auditorium of stalls, circle and gallery, supported on cast-iron columns in circle, which also has plaster ceiling. Large coved ceiling forms central dome over auditorium, with steeply raked gallery continuing behind. Elaborate balcony fronts with plaster swag decoration. Proscenium arch survives, with top cresting, blocked by later inserted cinema screen. Theatrical flies, grid and 13.4m deep raked stage survive behind this.
To the left of the stage is a lighting perch which contains a Rank lighting control board. This is a Sunset Dimmer rack, Grand Master version, connected to dimmers in the projection box. In the rear cinema projection box are two carbon arc "Kalee" projectors with "President" lamphouses and "Universal" bases, a later discharge lamp film projector, and also 2 carbon arc discharge follow spots and a carbon arc discharge slide projector, all of probable 1950s date. A side room contains a mercury discharge transformer and an AC-DC generator.

The Theatre Royal was opened in 1902 as a replacement for an early Theatre Royal nearby in Frank Street. It first showed films in 1914, which were combined with live shows until 1972. Included as a complete Edwardian theatre, its balconies and decorative areas intact, with proscenium arch. The exterior is notable for its lavish terracotta and brick decoration.

SUMMARY OF IMPORTANCE
This 1902 former theatre and cinema, now disused, is of special significance as a substantially complete Edwardian theatre.
Its exterior is striking, lavishly decorated in brick and terracotta. The interior has a largely intact auditorium, of stalls, circle and gallery. The balcony fronts, proscenium arch and coved ceiling are elaborately decorated with plaster swags and other decoration.
An early Strand lighting rig, and several early carbon arc projectors and follow spots within the projection room, add to the theatre's special interest.
The intactness of this building, combined with its lavish decoration and early lighting equipment, means it meets the criteria of architectural and historic interest in a national context and fully merits inclusion on the statutory list.