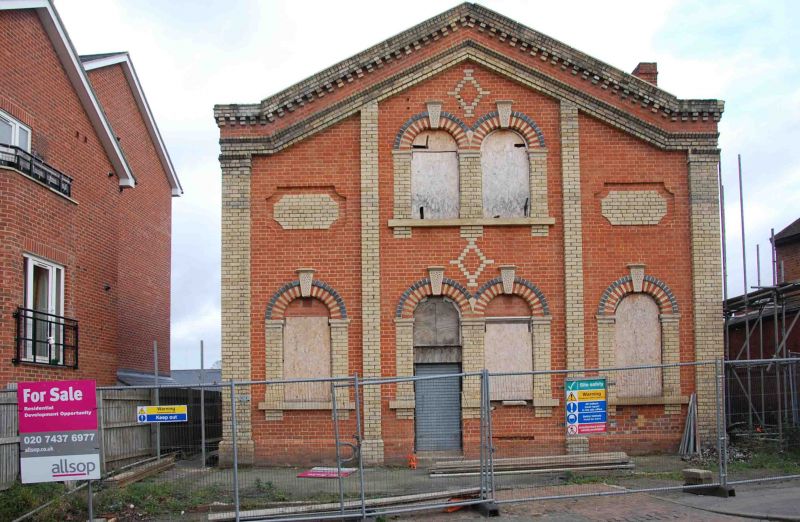 School, later industrial premises, part now Youth Club and part unoccupied and in a state of disrepair (September 1999). 1810 by R Billing, senior; rear addition 1817-18; altered and extended later C19. Of red brick with Welsh slate roofs. Four separate elements, of two or three storeys, and all of different heights. 1. The original 2-storey 1810 section is the lowest, built of red brick in Flemish bond, and having (on its north side): an inserted door; a small window on right with header-brick arch and clerestory. 2. The 1817-18 section added to rear (east) of original part: 3 storeys, the upper storey an addition.; 4 bays. On ground floor, blocked and inserted openings, including a wide segmented-arched door on right. Upper floors have wide segmented-arched windows with stepped chamfered sills and small-pane glazing. Graffiti in the earlier brickwork includes the dates '1874', '1877' and '1878'. 3. Mid-late C19 addition at road (west) end and facing road is of finely-pointed red brick in Flemish bond with yellow-brick pilasters defining bays and gable. Round-arched openings with stone and polychromatic-brick dressings: corbelled sills, pilasters with capitals; voussoirs; keystones; and arches. Central bay has paired windows to each floor one of those on ground floor made into a door, and decorative lozenges. Outer bays have decorative panel instead of window to upper floor. Left return has windows of 2 lights and one light to ground floor and one of 3 lights with chamfered brick sill above. 4. Mid-late C19 addition at east (rear) end set at right angles, is of 2 storeys with loft. North side has 3 bricked-up lunettes to ground floor, one now a window; inserted fire-escape door on 1st floor; and small pane loft window. Rear elevation has paired, wide, segmental arched openings with doors and small pane metal windows. Four large segmental arched windows with similar glazing and stone sills above. Stepped eaves. Raised verges. Interior: 1810 section1810 section: board-lined walls and some boarded partitions; braced wooden queen-post roof trusses; later stair up to the first floor of the added front block. 1817-18 section: metal column supporting a large-scantling cross-beam on the ground floor; roof trusses as in 1810 section (probably re-used when roof raised). Piping from former gas lighting throughout. The school was established by committee in 1809, at first in temporary accommodation, and subsequently in the purpose-built school on Southampton Street. Initially there were male pupils only, the 1817-18 addition being built to provide accommodation for girls. The school was run in accordance with the recommendations of Joseph Lancaster, a leader in educational reform in the late C18 and early C19, and it is believed to be the oldest surviving such school in Britain.