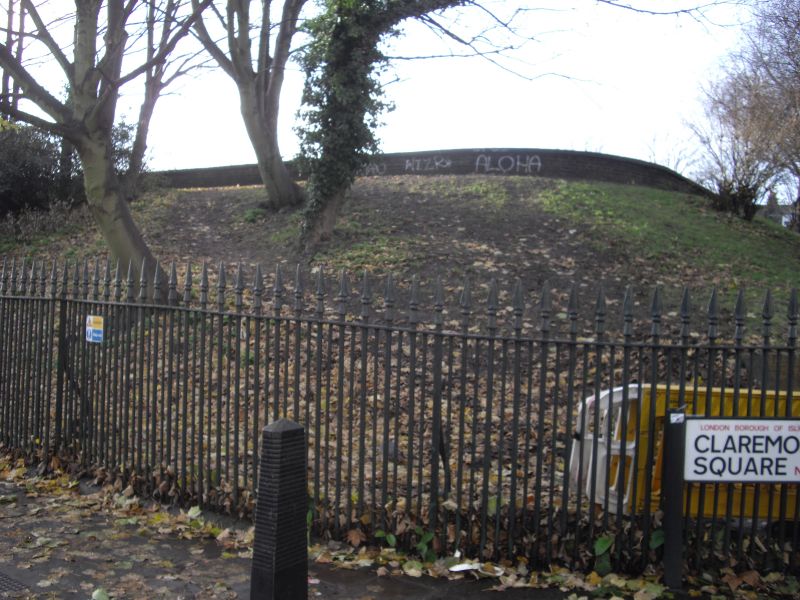 II
Covered reservoir. Built in 1855, designs by John Murray, following The Metropolis Water Act of 1852 instigated by the cholera epidemic of 1846 which required all reservoirs within London to be covered. It was on the site of the Upper Pond of 1709, an open reservoir connected to the New River system dating from 1608-1613, but no trace of the 1709 structure is now visible.

The structure lies entirely within Claremont Square railings and is a square structure about 80 metres across built of stock brick with some Yorkstone floor slabs. Externally little of the structure is visible, covered in grass about four metres in height, with steep sides rising to a low, stone-capped brick parapet above the line of the basin wall. The roof, also grass covered is pierced by rows of iron ventilation pipes and eight circular equipment hatchways with domed metal covers. Principal pedestrian entrance to the east where a slab-covered entrance protrudes from the parapet, leading to two flights of stone stairs with iron handrail descending to floor some eight metres below.

The interior is divided into eleven north-south bays separated by partition walls providing support for the barrel-vaulted ceiling. The partition walls are each pierced by ten narrow apertures with segmental arches and braced by two cross walls, similarly arched over each bay. The outer wall is battered at a shallow angle, probably to counteract the weight of the earth mound outside. As the reservoir acted as a header tank, supplying Islington and the West End by gravity there is no pump equipment. The inlet at the south side has a large iron bore pipe with a gate valve operated by a control rod rising through the ceiling. Similar pipes, one with a similar control mechanism, provide outlets at the southwest, northeast and northwest corners. This equipment is of 1855 and stands on slightly raised floors of Yorkstone slabs, more resistant to swirls and currents than brickwork. Flagstones were also used to line a shallow, two metre wide channel across the southern end of the basin leading to a drain at the west wall, used when flushing and cleaning the basin. The rest of the floor is of brick, forming slightly concave channels at the foot of each bay. The structure is entirely of 1855, except for two additional outlet pipes set into the west wall and some associated areas of rendering.

[Plans of 1855 held by Thames Water.
Illustration of the 1855 covered reservoir under construction reproduced in "The Engineer" October 1948 (reprinted 1954).]