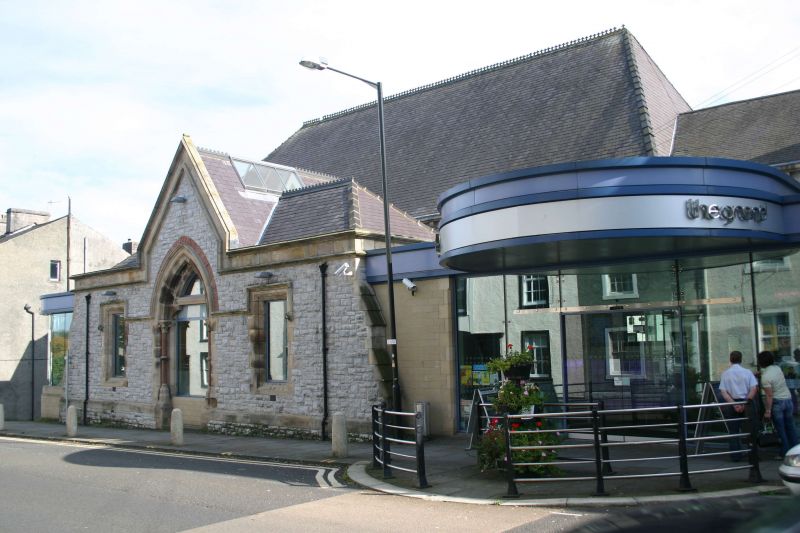 Civic hall, now cinema. 1873-4 as the Clitheroe Public Hall, converted to the Grand Kinema in 1921. Irregularly coursed stone walling with ashlar dressings; slate roof with crestings. The hall is sideways to the road, with small symmetrical entrance block containing manager's office and ladies' lavatory as well as foyer. Higher, single storey hall, with stage to right and projection suite up stairs to left.

Front range with central gable over doorway with engaged columns, double doors and top light between deeply moulded Gothic pointed arch. Impost bands unite this composition with the windows to either side, terminating as hood moulds with ball stops over square casement windows. Similar windows with hood moulds on the side return, and simpler square casements to the hall.

Interior. Narrow foyer with terrazzo floor and paybox leads directly into hall. Auditorium with shallow rake holds nearly 400 people, with stage at one end and projection suite up stairs at the other. Open timber truss roof with hammerbeams set on wall brackets and wrought-iron tie bars. The walls lined in timber panelling. Gas secondary lighting on wall brackets. Brass pendant lights add to the sensation of mock-Tudor pastiche.

Included as a fine, early example of a public hall that has been given added interest by its conversion to a cinema.