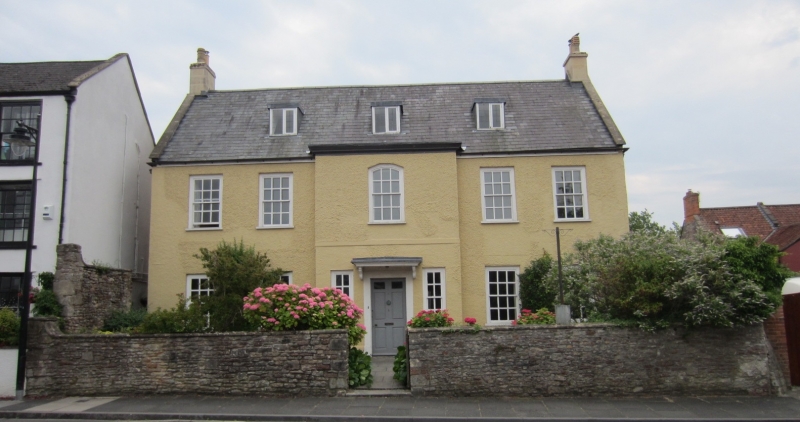 Vicarage. Early to mid C18, some C17 interior detailing, later
additions. Rendered and colourwashed, Welsh slate roofs
between coped gables, ashlar and concrete block chimney
stacks.
PLAN: compact double-depth plan with central hall, staircase
centre, left. Double roof plan.
EXTERIOR: 2 storeys with attic; symmetrical 5 bays, of which
central bay is wider and projects slightly, with lead flat
roof. Sash windows with thick glazing bars, 12 panes, set in
plain openings, the first-floor window to centre having a
segmental arched head.
Entrance in centre, 6-panel door with timber hood on heavy
brackets, flanked by slim 8-pane sash windows. Lean-to garage
against front west gable.
INTERIOR: the square entrance hall has an unusual 'cornice',
with lion-faced modillions, but no cornice mould. The rear
room, right, has 3 windows of the later C18 or early C19, the
centre one dropped to form a door, a C20 fireplace, and rich
panelled doors. The corresponding room to the left has mid C18
paired sashes with shutters, a bolection mould fireplace, and
painted C17 panelling, probably from elsewhere. The dog-leg
staircase is painted, with turned-on-square balusters and
fretted ends to the open string. A wide hallway with arched
doorways runs through to the rear.
SUBSIDIARY FEATURES: attached to north-west corner, with a
boarded gate against the house, is a tall random stonework
wall with step down towards front, returning along front
boundary at about 1.5m high, with concave upsweeps each end,
and gap for gate opposite door, then a return towards the
house on the east side with height stepping up to about 3m,
and then a small sweep down, the whole adding to the setting
of the house and streetscape generally.