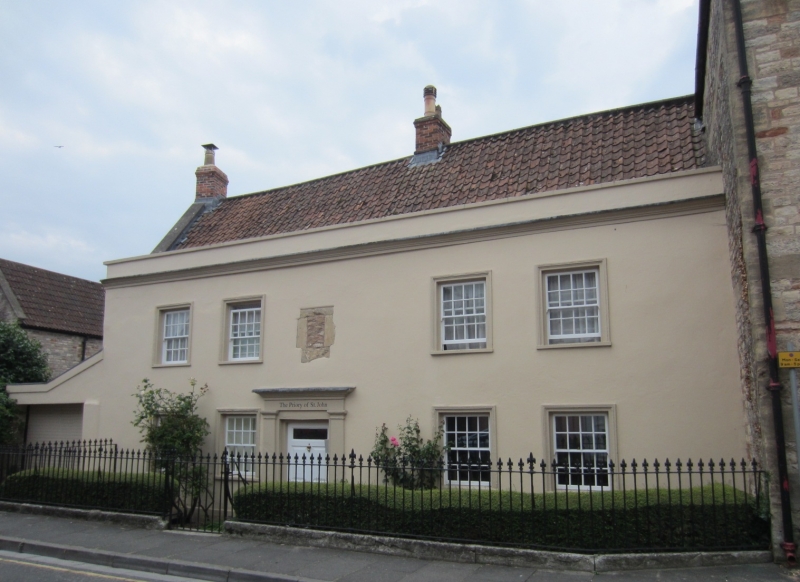 Former priory building, possibly guest house, now house. Late
C14/early C15, floors inserted C16, modified C18 and early
C19. Rendered and colourwashed, with ashlar dressings, clay
pantiled roof with coped gable to south and abutment to north,
brick chimney stacks.
PLAN: a former open hall in 5 bays, with base crucks and upper
crucks; plan now has cross-passage returning to the later
straight-flight transverse staircase to the right, and a long
narrow rear wing in two stages, set at a slight angle to the
early range, inflected to the adjacent stream.
EXTERIOR: 2 storeys with attic, 4 windows, 16-pane sashes in
moulded stone architraves, 2 each side of doorway, off-centre,
left, with 6-panel door in Doric pilaster stone surround to
plain entablature; above the doorway a blocked small opening
with flush stone trim. Small ridge stack to right of passage,
and gable stack to left. Plinth, cornice with blocking-course
and parapet, returned to coped gable. South gable has a
2-light chamfer mullioned window with pointed lights and
incised spandrels, without label, towards the front, and a
casement window towards the rear, set lower, and the attic has
2 single-light pointed windows. C20 garage against lower part
of gable.
The rear of the main range includes a 2-light chamfer-mullion
casement, and a 5-panel C19 door.
The wing, which is pantiled, is hipped at the outer end, and
has 2 ridge stacks; windows are mainly C20 replacement
casements, but there is one first-floor 3-light window with
moulded mullions and early iron casements.
INTERIOR: the passage and return have large lias flagstones,
and the straight staircase has simple splat balusters, of
uncertain date. To the left the parlour has 3 deep chamfered
beams and a C20 fire surround, and to the right the dining
room has an exposed rubble gable-end wall, with 2 small square
recesses set low, and a transverse chamfered beam; the room is
enclosed by a light partition to the stair well. There are
fielded panel doors, including a good 4-panel in the rear
wing. At the junction of the wing with the rear range are the
remains of a former stone spiral staircase, the ends of the
treads visible.
At first floor a corridor has been made across the full width
at the rear, with 2 bedrooms separated by the large inserted
chimney-breast. The room to the right has a C19 fireplace, and
at the front a passageway/cupboard through to the second room
has parts of the lowest range of wind-bracing visible. The
second room, to the south gable, has a fine early boarded
floor, and a wide stone fire surround, with chamfered edge,
below a section of plastered wall with C16 fresco in
geometrical patterns. The feet of the base crucks, which were
set high, are visible in the bedrooms. There are various early
doors, some with L and H hinges. A cast-iron spiral stair at
the south gable end gives access to the roof, which retains
most of the original structure, '..... one of the best
preserved mediaeval structures in Somerset ..... resembles the
Abbey Barn at Glastonbury...' (SANHS).
There are five principal base cruck trusses, with
superstructure of upper crucks, including one to each gable,
and 2 secondary trusses. The two principal trusses over the
hall are chamfered, with cusped arch bracing, and there are 3
purlins, the top one clasped by the collars of the upper
crucks, and 3 ranges of wind-bracing; there was no ridge
purlin. Plates are set square. The wind-bracing members are
identified by Arabic numerals, used at an unusually early date
for England. Most of the rafters are also of early date. The
wing has A-frame roof trusses, without ties, and there are 2
blocked window openings on the north side, facing Priory Road.
SUBSIDIARY FEATURES: a low stone wall with fleur-de-lys
railings and central matching gate on 2 steps down extends
across the full width of the main range, setting in at a
slight angle to the right to meet the gable-end of the
adjoining property. To the left the wall and railing returns
at right angles to meet the front wall of the main range.
HISTORICAL NOTE: a remarkable survival, carefully restored and
maintained, with the blackening throughout suggesting the
original use of low partitions. The base cruck trusses invite
comparison with the Glastonbury Abbey barns group and Bratton
Court, near Minehead; strong similarity to King's Head, High
Street (qv). In the dining room is an original deed of 1738,
and this is said to be one of 33 extant deeds to the property.
Although a late C14 date is usually thought to be appropriate
for the building, Gilson and Williamson (op cit) thought that
it might be earlier than this.
(Somerset Archaeological and Natural History Society
Proceedings: Williamson Cmdr and Gilson RG: Base Crucks in
Somerset: Taunton: 1977-: 55; Williams Cmdr.: Vernacular
Architecture Group Report: 1976-).