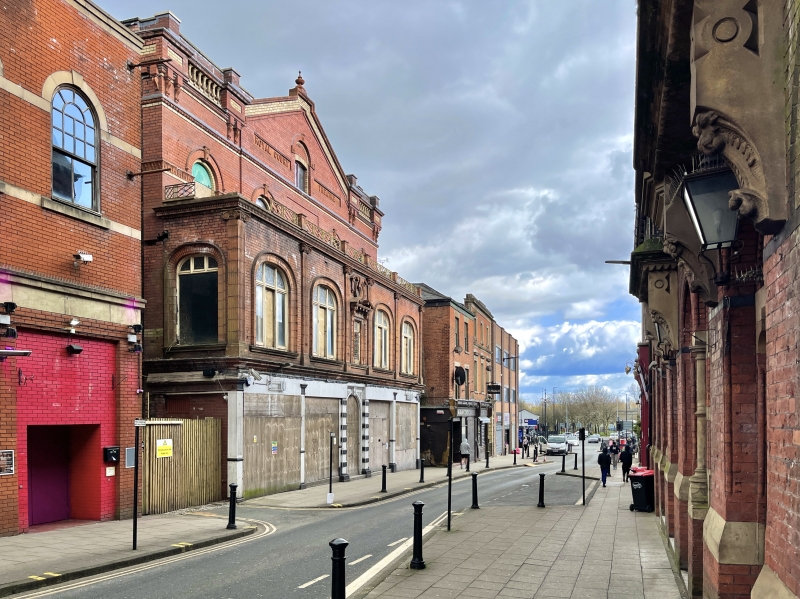 Theatre, subsequently cinema, bingo hall when surveyed. 1886 and 1895,
by RT Johnson; altered. Red brick in English garden wall bond
with dressings of matching red terracotta and some yellow
brick (roof concealed but probably slate). Large rectangular
plan at right-angles to street. Eclectic style, with some
Renaissance detailing.
EXTERIOR: Three storeys and five bays, with 2-storey projected foyer
(added 1895): this has fluted pilasters to both floors (Ionic
at first floor but partially concealed at ground floor by C20
fascia), a continuous dentilled cornice and geometrical
cast-iron balustrade; at ground floor, a round-headed doorway
in the centre with banded pilasters, flanked by recessed
entrances with wooden panelled and plate-glass doors, and shop
windows in the outer bays; at first floor, a window in the
centre with leaded stained glass and an elaborate
broken-pedimented architrave with an oculus immediately above
set in a swan-necked architrave, and large depressed-arched
6-light transomed windows in the other bays with moulded
terracotta surrounds and leaded stained glass in the upper
lights. Above and behind is the gabled end of the main range,
which has four round-headed windows with mask keystones of red
terracotta, an egg-and-dart frieze, a round-headed window in
the gable flanked by sunk panels with raised lettering "ROYAL
COURT" "THEATRE"; and stepped gable coping with a flaming-urn
finial, flanked by yellow terracotta balustrading over the
outer bays.

INTERIOR: foyer with a pair of composite columns flanking the
foot of an imperial staircase with brass handrail; auditorium
with two curved balconies, the first with Adam-style moulded
plaster decoration (the upper now enclosed); side walls with
large pictorial relief panels flanking the proscenium;
proscenium arch with moulded plaster enrichment, the top now
concealed by suspended ceiling; upper gallery now disused but
retains steeply-raked stepped floor (and inserted projection
room in centre), and visible from it the top of the proscenium
arch with moulded plaster pictorial scene and figures over it,
and very large circular gilded ceiling dome. Despite some
alteration firstly as cinema and latterly as bingo hall, still
essentially intact.