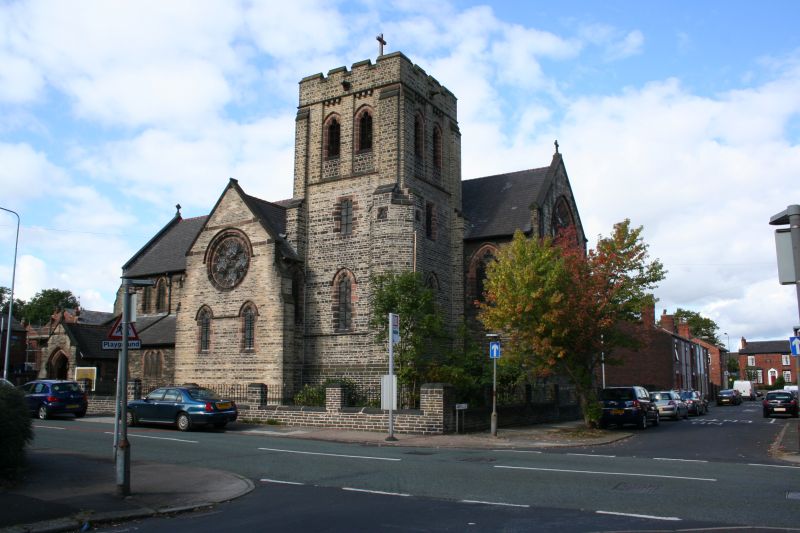 Church. 1891-2. By Heaton and Ralph of Wigan. Coursed
sandstone rubble, slate roofs. Early English style, with some
Arts-and-Crafts motifs.
PLAN: nave with north and south aisles, south porch, south
transept, south-east tower, chancel with north vestry.
EXTERIOR: the 4-bay nave has pilasters, pairs of cusped
lancets to the clerestory, and a large 5-light west window
with cusped lights and multifoil tracery. The low lean-to
aisles have mullioned windows of 2 and 3 round-headed lights;
the south aisle has a gabled porch to the 1st bay with a
moulded segmental-pointed arched doorway and ridged gable
coping with an apex cross, and a short transept to the 4th bay
with 2 cusped lancets and a rose window with circular trefoil
tracery. The squat 3-stage tower has a polygonal south-east
stair-turret up to the 2nd stage, one-light cusped windows to
the 1st and 2nd stages, pairs of cusped lancet belfry windows
and an embattled parapet. The 2-bay chancel has 2-centred
arched 2-light windows in the south side and a large 2-centred
arched 5-light east window with tracery.
INTERIOR not inspected.