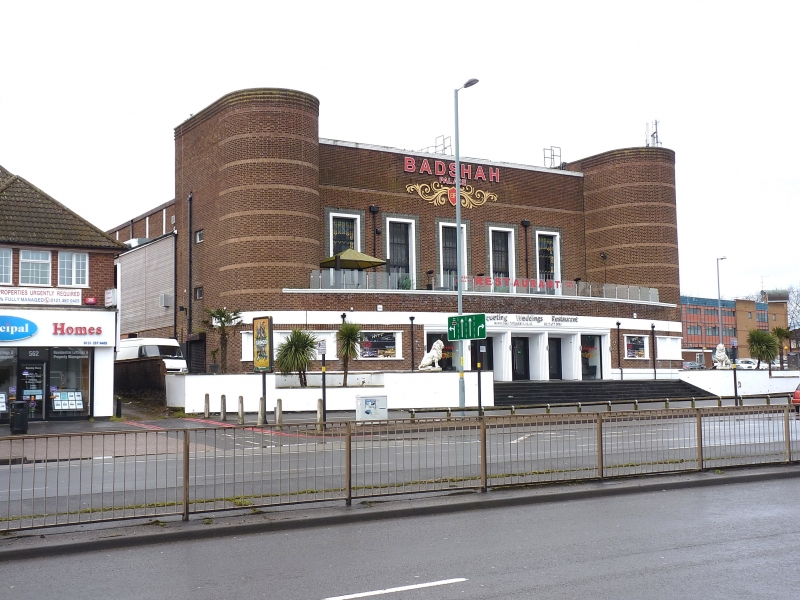 EXTERIOR: With a powerful Moderne facade facing Walsall Road, the building stands on a low plinth, approached by sets of wide steps. The frontage, of fine quality facing bricks, is terminated at each end by two fortress-like `D'-shaped towers containing emergency stairs. A single-storey entrance front breaks forward as a broad convex bay, with the recessed main wall of the building having five regularly spaced vertical windows. Above is the name of the cinema in original sans serif letters. Straight plaster cornice over the central block and channelled brickwork at the tops of the towers. Five sets of entrance doors grouped in the middle of the single-storey frontage, flanked, on each side, by four film advertising poster frames. Above are bands of vertically laid bricks of rounded profile. The facing bricks continue on the right return wall, the long auditorium facade enlivened with giant brickwork panels. There are but few windows and all are small, serving offices or lavatories - three on the return face of the left tower and a further six in the right-hand street front. The rear elevation expresses the stage and the film sound `horn' chamber. There is also a chimney for the heating plant here. A single storey extension at the rear has an emergency exit door and six blocked windows. Because the left return wall is largely hidden behind adjacent buildings it is treated more functionally, having an emergency exit stairway and revealing the vertical steel structural members. Roof not seen.

INTERIOR: The large double-height auditorium is approached through a wide but shallow outer lobby in the single-storey frontage and then by an inner foyer with a ceiling having Moderne style mouldings. On the right of the inner foyer, a dog-leg stair, with elaborate Moderne balustrades, ascends to the balcony foyer. This foyer is extended under the balcony where a door leads through to the vomitory (part of the balcony rakers can be observed here). The auditorium is of simple decoration with a balcony at the entrance end opposite a proscenium framed by two ante-prosceniums, the inner of which is enlivened with banded mouldings. The balcony front mouldings are based on the cyma recta and reversa. Five arched-top niches in protruding frames area set high up on the side walls. Modern-style moulded horizontal ventilator grilles int he ceiling. Shallow stage. On the left ante-proscenium wall is rare, possibly unique, ventilation indicator with a clock face inscribed with the characters *FAN*WORKING instead of numbers.

ANALYSIS: A good example of a 1930s `neighbourhood' super cinema, which makes a memorable statement on the arterial road it faces in its suburban location. The main facade has particularly fine brickwork in the tradition of the Arts and Crafts movement, while the interior is relatively unaltered and there are interesting surviving features such as the Moderne metal stair balustrades and the clock face in the auditorium. The Clifton, Great Barr, formed part of the Clifton circuit of cinemas based in the West Midlands and run by Cinema Accessories Ltd. It became a bingo club in c.1980. Roberts was the company's `in-house' architect, and a major regional figure in cinema design; little else of his work survives, save for the listed Regal, Wells, also for the Clifton circuit.