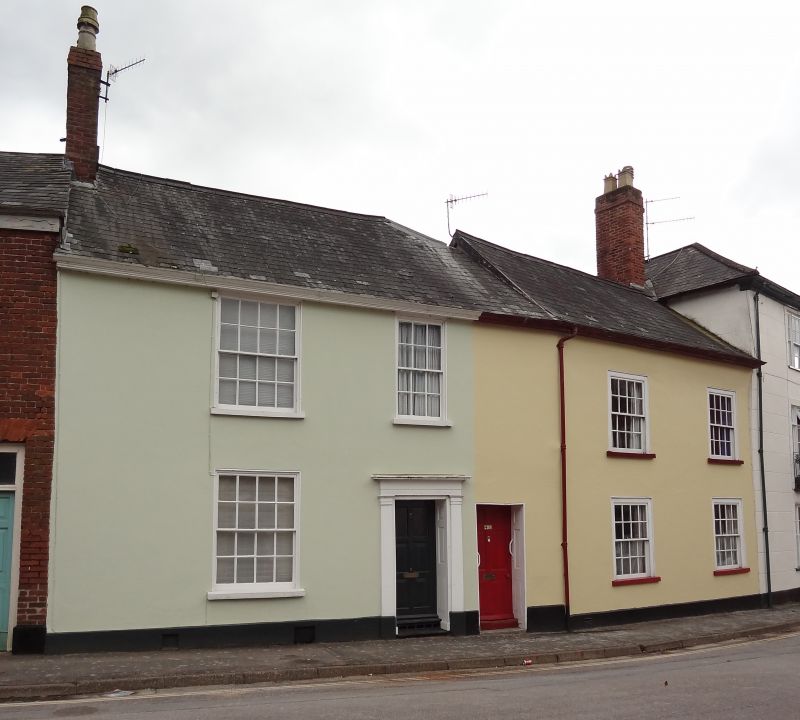 2 adjoining houses, different builds but believed to have been
one property at one time. c1820s or earlier. Smooth-plastered
mass wall construction, said by owner to be stud with cob
infill, as is party wall between properties. Slate roofs
(No.43 half-hipped at right end); end stacks with brick shafts
and variety of old pots; cast-iron rainwater goods.
PLAN: No.43 inspected. One room wide, 2 rooms deep, with
former basement kitchen and entrance passage (to middle of the
range) containing stair, rooms heated from left end stack.
No.41 also has entrance sited towards middle of the range.
EXTERIOR: 2 storeys. Asymmetrical 2:2-window front. No.43 has
a 6-panel front door, the upper panels glazed, the lower
fielded. Pilastered doorcase with fielded panelled reveals.
left-hand windows are 16-pane hornless sashes, 12-pane sash
over front door. No.41 (to the right) has a plainer doorway
with recessed 6-panel front door with fielded panels and
reveals. No.41 has 2 ground and 2 first floor boxed 16-pane
sash windows.
INTERIOR: No.43 inspected. This preserves an early C19 stick
baluster stair and other original joinery. The front parlour
has round-headed recesses on either side of the fireplace with
pretty plaster leaf decoration and C19 fitted cupboards
flanking the fireplace in the rear room.
The reported cob construction is unusual for Tiverton.