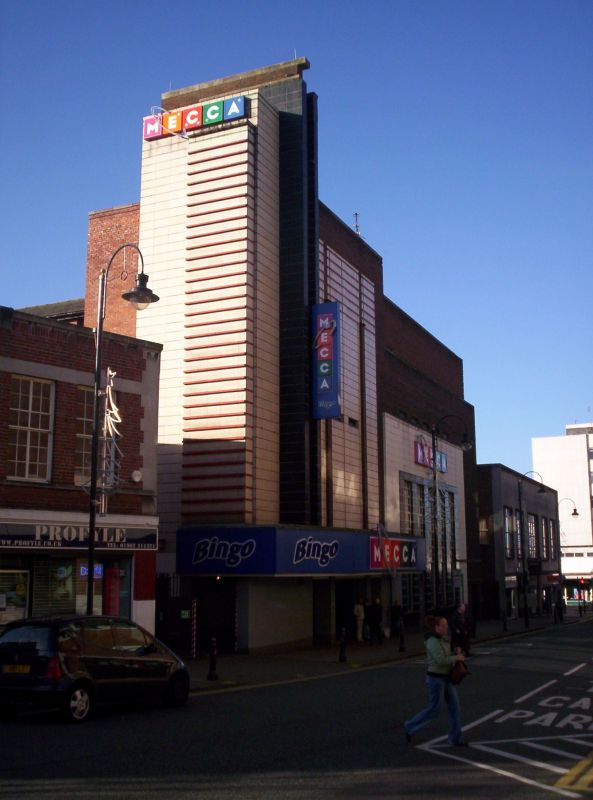 A former Odeon cinema, which became a bingo club after June 1983. It opened in September 1937. Architect: P.J. Price of Harry Weedon's practice. Brick and faience. Double-height auditorium with balcony and small stage, with foyer and staircase to front.

Asymmetrical facade to Skinner Street in Moderne style. Cream faience-clad tower on left enlivened by vermilion faience protruding mouldings. Black faience clad oversailing fin projects forward from facade. Cream faience cladding above entrance is unrelieved except for two horizontal slit windows half-way up and more vermilion faience projecting mouldings at the top. Lower section to the right has five double-height windows outlined in black and green faience stripes, framed by cream faience. This composition is surrounded by unrelieved brick (except for five horizontal slit windows placed to line up with the double-height windows) which also extends over to the tower. Glazing bars in upper level of double-height windows only. Stock brick return walls.

Interior: outer lobby was originally double-height with high coved ceiling. The upper part of this may exist above a later false ceiling. Stairs to the balcony (with original chromium handrails) to the left. Entrances to the right lead through to an inner lobby which retains original crenellated' frieze mouldings and an Odeon' skirting. Curving draught entrance lobbies to the auditorium.

Original Odeon' doors and triple-stage skirting in upper foyer. The floor of the upper foyer does not meet the Skinner Street facade wall but instead finishes with a balustrade forward of the wall where it was formerly possible to look down to the ground floor lobby.

Recommended for Grade II listing as an almost complete example of the Odeon style'. The Odeons were the style-leaders in cinema design of their time. The facade is a particularly successful essay in streamlined modernism, with no drastic subsequent alterations. The tower and fin feature advertises the cinema, creating a landmark. The difficult problem of how to compose a facade in which few windows were required is addressed within the constraint of the positioning of those that were allowed being dictated by the strict demands of a functional plan.