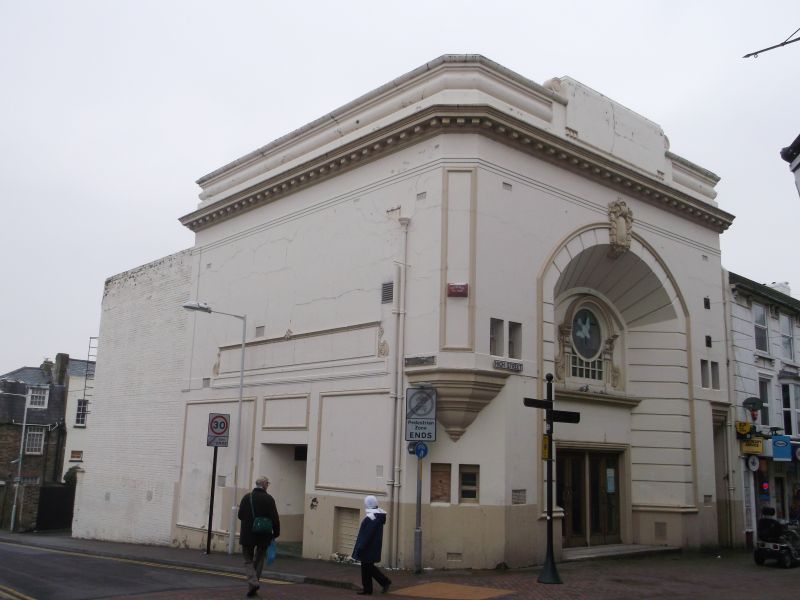 EXTERIOR: Two storeys in subdued Baroque style. The principal feature on the High Street front is a centrally positioned monumental double-height arch with channeled rusticated jambs and a keystone cartouche. Around the top of the main block is a frieze defined by shallow triple plaster string mouldings, above which is a rich entablature incorporating a dentil cornice and pulvinated frieze. Over the entrance arch is a wide tablet with scrolls and guttae at the corners. The ends of the main front have chamfers, the upper storey being corbelled out on elaborate mouldings. Above these latter features are two sets of small twin windows. The left return wall has an emergency doorway surrounded by plaster mouldings to create panelling. Stock brick rear walls. Roof not seen. The entrance arch contains two sets of double doors, above which is a frieze. Further up is an area of square-pane glazing surmounted by a large circular window with a deep hood moulding, flanked by miniature pilasters and volutes.

INTERIOR: A small foyer leads to a double-height auditorium with decoration dating from the two periods of construction. A beamed ceiling of neo-Baroque plasterwork is arranged as fields with lattice roundels to disguise ventilation extracts. At the junction with the side walls the beams are supported by double consoles. The furthest ceiling panel is inclined towards the top of the proscenium. The balcony has a serpentine and shaped front with, on the lower edge, a key-pattern fret. A continuous fibrous plaster streamlined cove below the cornice consoles runs from the balcony along the side walls to form the top of the proscenium, the sides of which feature are created by another area of fibrous plaster cast as vertical flutings. Late twentieth-century fielded panelling on the side walls. The balcony has been converted to office space but the original dome and rich plasterwork mouldings survive above false ceilings.

ANALYSIS: A good example of an architecturally refined early cinema, with many original features and the additional interest of the streamlined work of 1936. The facade is particularly fine of its date. Stonham was a significant local architect, who also designed the listed Torbay Cinema in Paignton, in which he held shares. The building closed as a cinema in 1987.