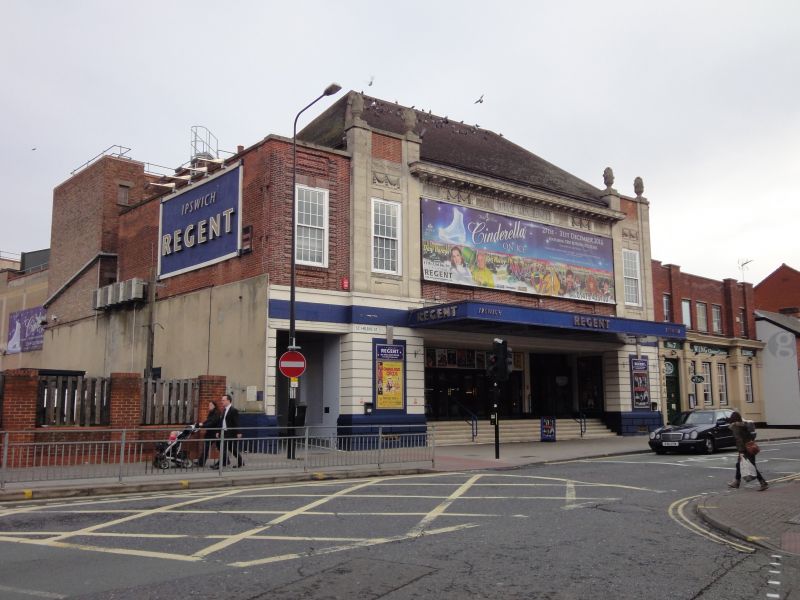 EXTERIOR: Two-storey neo-Georgian facade to St. Helen's Street. Wide portal with steps up to the entrance flanked by walls of painted stone cladding, these channelled and with rusticated plinths. Canopy over entrance. Symmetrically arranged upper storey of five main bays with an additional bay on the left over a separate front stalls entrance. Jambs of the three central windows and the additional one on the left in the form of brick quoins, the two remaining windows having stone surrounds. A fluted stone frieze carries an inscription THE REGENT above the central window, with swag festoons over the others except for the window in the extra left hand bay. Hood moulding over the middle three bays with a modillioned soffit and miniature festoons on the edge. Hipped tile roof above this section, the outer bays rising to parapets crowned by four finials in the form of stylized funerary urns. The left-hand return wall has an original advertising frame with the PCT monogram on each corner. Joined on at the rear of the building is the former manager's house, a rarity in the cannon of cinema architecture.

INTERIOR: Four sets of double entrance doors flanked by original stained timber revolving doors, which are unusual features in cinemas. Spacious entrance foyer with two sets of original double doors, partly glazed, leading to the inner foyer. Fine Art Deco style chrome-plated brass door furniture. Fireplaces in the foyer are now concealed by partitioning. Stairs on the right of the entrance foyer lead up to the balcony. Curving inner foyer or crush hall with sets of double doors to the auditorium main floor (those at the extreme ends are original) and steps up to single doors leading to fourteen boxes - another feature unusual in cinema design. Festoon frieze at cornice level, parts of which are hidden by a false ceiling which also conceals the original coffered ceiling. Doors in the left-hand return wall lead to the former front stalls lobby which has an original paybox, although now blocked - a further unusual feature to have survived.

Large fan-shaped auditorium in a simplified classical style with a line of boxes beneath the shallow balcony soffit. Fluted curving splays to the proscenium, which originally had changing colour illumination in the outer coving. The stage is 11.4 metres deep and has a fly tower. Coffering on the ante-proscenium arch. Horizontal banding on the dados of the flank walls. The continuous horizontal mouldings on the balcony front are extended forward to meet the ante-proscenium, thereby creating a string course. The walls above the string course are arranged with six bays each side, divided by plain pilasters, the stage sides of which are recessed to accommodate lighting. The panels in the bays have fluted surfaces, possibly as a device to assist the acoustics. Octagon in ceiling, which also accommodates rooms for film projection and spotlights. Scrolling decoration on the ceiling surrounding the octagon and in its interior. The octagon rises to form a dome which is treated with a textured acoustic' paint. From the centre falls a timber and plaster octagonal triple-stage lighting fixture directing light up to the dome. Entrance to the balcony is from the rear wall rather than through a vomitory. When the coved cornice reaches the rear wall it is formed into scallops. Original steel handrails on the side walls at balcony level.

Stairs from the entrance foyer to the balcony are arranged in four flights. Off the second landing (which has a rectangular skylight of geometrical design) is a small ante-room leading to the former restaurant over the entrance foyer. The ante-room has a radiator shield and stair balustrade in stylized neo-classical form. The former restaurant has a ceiling of coved plaster with a scalloped central section. The top stair landing has twin double doors leading to the rear balcony, again with high-quality door-furniture.

The interior of the former manager's house is simple and utilitarian, with late C20 alterations.

ANALYSIS: Included as an example of the late 1920s' cine-variety theatres designed by William Edward Trent for Provincial Cinematograph Theatres. It incorporates unaltered features, not usual in cinemas, such as the line of boxes at main floor level (almost certainly derived from Matcham's London Coliseum of 1904), the separate front stalls entrance (a planning survival from the segregated entrances of Victorian and Edwardian theatres and music halls), the manager's house and the revolving entrance doors. Decorative interest lies in the superb Art Deco door furniture and surviving internal architectural embellishments. Of special note is the lighting fixture suspended from the dome; possibly one of the earliest surviving manifestations of design derived from German Expressionism to be seen in an English cinema (c.f. demolished Welwyn Garden City cinema-theatre of 1928 and PCT's New Victoria, the revolutionary cinema in London designed by Ernest Wamsley Lewis, under construction simultaneously with the Regent, although it did not open until October 1930). The design may originate from the stalactite' light fittings in the New Victoria (presently Apollo Victoria, listed Grade II*, City of Westminster). There is also technical interest in that the Regent auditorium was one of the first to be specifically designed for sound film, incorporating sound absorbent and reflective concepts such as the fluted baffle' panels and the textured surface of the dome. The building closed as an Odeon cinema in 1991, re-opening in the same year as a live theatre.