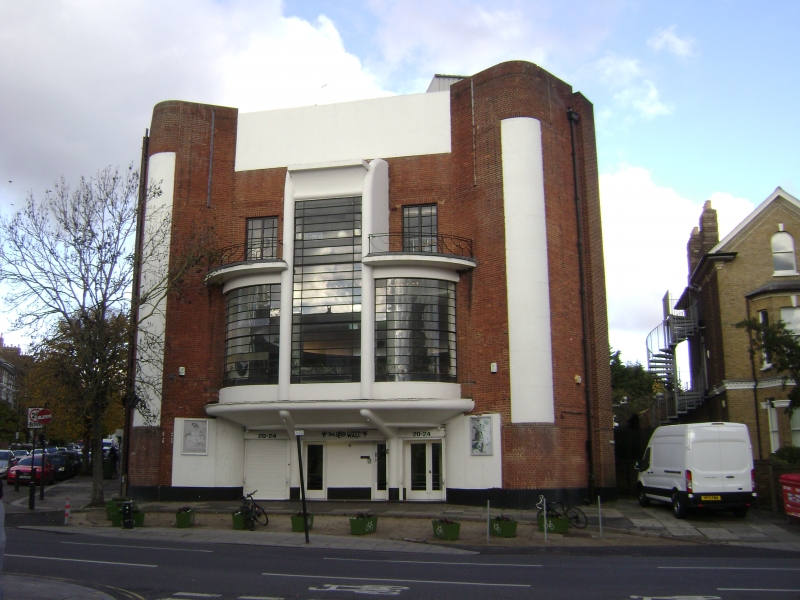 Former cinema, built as the Dominion in 1936-7 for Albert Bacal and N. Lee. Architect: Frank Ernest Bromige LRIBA (1902-1979). Facade in brown facing brick and render. Left return wall entirely in brick. A chimney rises beyond the low stage house. Roof not seen on the foyer block but there is a pitched roof over the auditorium. Double-height auditorium with balcony, entered via double-height foyer with paired staircases.

EXTERIOR: Tall, symmetrical, Moderne facade. In the centre, three sets of paired entrance doors, flanked by splay walls, the first part rendered. In the centre, the first and second floors break forward as a cantilevered structure to form a large area of glazing, at the same time creating a canopy over the entrance. Twin vertical members rise from this canopy to the third floor level, then curve inwards as fins to support an oversized cornice. The vertical members are filled with continuous glazing, which, at first floor level only, bends around on either side to meet the brick. These glazed areas have broad cornices above which are balconies with Art Deco metal balustrades. All glazing with multiple transoms and margin mullions. French doors give on to these balconies either side. At the top is a deep parapet which formerly carried the name of the cinema. This and the top of the fins are masked by a recent metal fascia. The tall slender windows on the flanking stair towers have also been covered. Left return wall entirely in brick; the pilasters (which express the steel-frame structure) having stepped summits. Two double-doors together with sundry small windows for offices and lavatories, at the entrance end. The far end has more exit doors and service accommodation windows together with a large rectangular louvered ventilation aperture.

INTERIOR: Foyer, with stairs to a landing over the entrance and then ascending to the balcony foyer. Moderne balustrades with chromium handrails. Ceiling with streamlined lighting coves. Chromium bowl torchere and similar fitment in the ceiling. Broad double-height streamlined auditorium with coves reaching down to the proscenium, over which there is a long horizontal grill. Large balcony with curved front and vomitory entrance. Narrow column pilasters divide the side walls into bays, the latter treated with banding.

ANALYSIS: A good example of a 1930s super-cinema, designed by one of the most interesting architects specialising in the genre at the time. The cantilevered facade and associated space-saving stair plan in the foyer (reminiscent of the arrangement in the Westminster Central Hall) must be unique in cinema design. The cinema closed as the Granada in 1972, to become a bingo club.