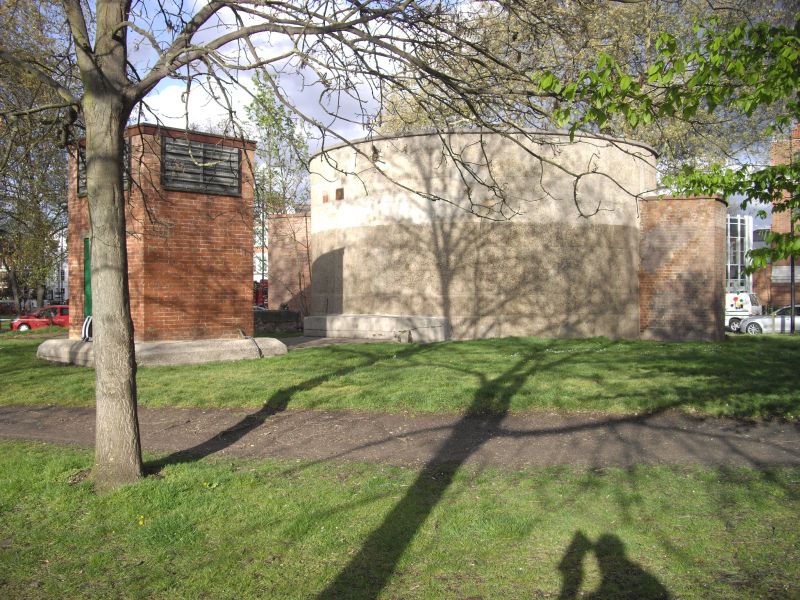 Deep underground shelter, erected as an extension to Clapham South Underground Station, which is already listed. 1940-2 by D C Burn for the Home office; Mott, Hay and Anderson engineers - G W Ellis and H C Webb the principal individual engineers concerned, in consultation with London Transport. Lined in reinforced concrete with steel fixings; main shafts of reinforced concrete with steel reinforced pillboxes designed to minimise the risk of flooding from shattered drains. Two main shafts descend from surface buildings, one in LB Wandsworth, one in LB Lambeth. Stairs connection from Clapham South station, now blocked at the top, leads to central lobby between two tunnels, each 16'6" in diameter and 1,400 feet in length, and with ancillary tunnels 9' and 12'3" wide linking them regularly and to lift shafts. Each main tunnel slightly curved, with concrete horizontal floor to make two levels. The tunnels were divided into sections, each with a different military name, served by a canteen and eight lavatory tunnels. Some 1940s iron bunks and painted sign age remain, along with graffiti from the 1940s and 1950s, making this the most complete surviving and atmospheric of the deep underground shelters.
The deep tube shelters were a response by the Home Secretary to the need for safe accommodation for essential services such as telephone services, government offices and military personnel. In 1936 the Home Secretary formed the Technical Committee on Structural Precautions Against Air Attack, which led to the development of ARP under Sir Alexander Rouse, who believed that deep shelters were the only safe defence against bombing. Eight special shelters were erected, of which seven were used by the general public during the V1 and V2 rocket raids of 1944, and subsequently by National Servicemen. They were designed so that they could be used by London Transport after the war as by-pass tunnels, creating a fast non-stop service past some of the smaller stations on the Northern and Central Lines, but this never happened. Clapham South is the only one to retain original signage, and one of the few to retain original bedsteads; it forms a group with the listed station by Charles Holden from which it is now separated by a brick infil wall.
Source: Nigel Pennick, 'Bunkers Under London', 1988