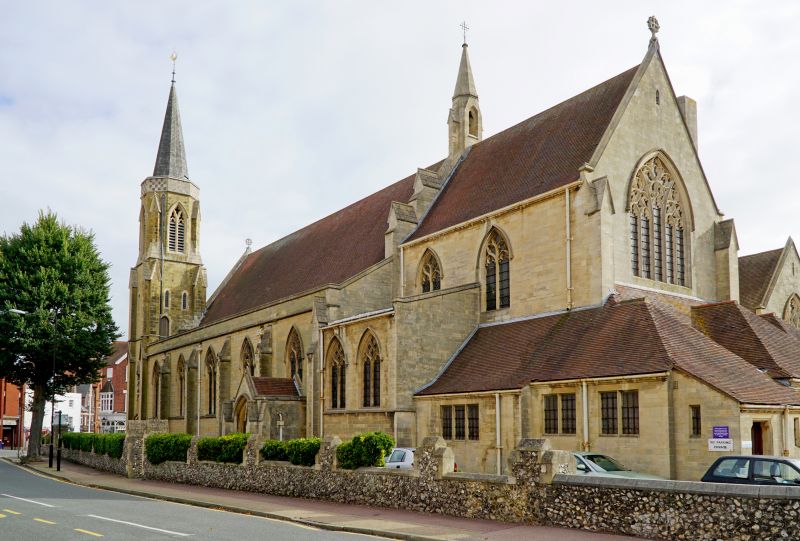 Roman Catholic Church. 1890-1903. By F A Walters. Buff sandstone and plain red tile roof. Decorated style. Chancel , with sacristy etc, nave, north aisle with baptistry, south aisle, lady chapel (north), south chapel, south-west tower and spire, shallow west porch. EXTERIOR. Chancel with five-light Decorated east window and two two-light clerestorey windows north and south. Gabled buttresses against the east wall. Chancel surrounded at the east end by sacristy, etc and chapels. Bell turret over the junction of chancel and nave. Five bay aisles with two-light windows with buttresses between, plain parapet and lean-to roofs. No clerestorey to nave. Tower with lancet windows in the two lower stages, two-light belfry windows, with octagonal third stage, parapet with chequerwork and behind this a shingled spire. Shallow west porch with Virgin and Child in a niche in gable. INTERIOR. Four bay nave with stone multishafted columns supporting pointed and chamfered arches. Octopartite wooden vaulting in chancel and nave roof keeled in imitation vaulting ribs. Elaborate Decorated reredos covering the whole width of the chancel with figures of saints under canopies, doors either side. Low stone screen in front of chancel. Carved wooden pulpit on stone base (north). Reredos in Lady Chapel with three sculpted panels depicting the Nativity, Adoration and the Flight into Egypt. Virgin and Child on a pedestal under a canopy (north). Reredos in south chapel, Christ flanked by two saints. Quatrefoil pier in the nave with subsidiary shafts in the angles, all members with fillets. West gallery on stone piers. HISTORY. A mission was established in Eastbourne in 1869 and a brick building was later erected in Junction Road. The building of the present church was led by Fr Charles Stapley and commenced in 1890 and completed in 1903 during the incumbency of Fr Paul Lynch. Bibliography: B W Kelly "Historical notes on English Catholic missions." (London, 1907), 162.