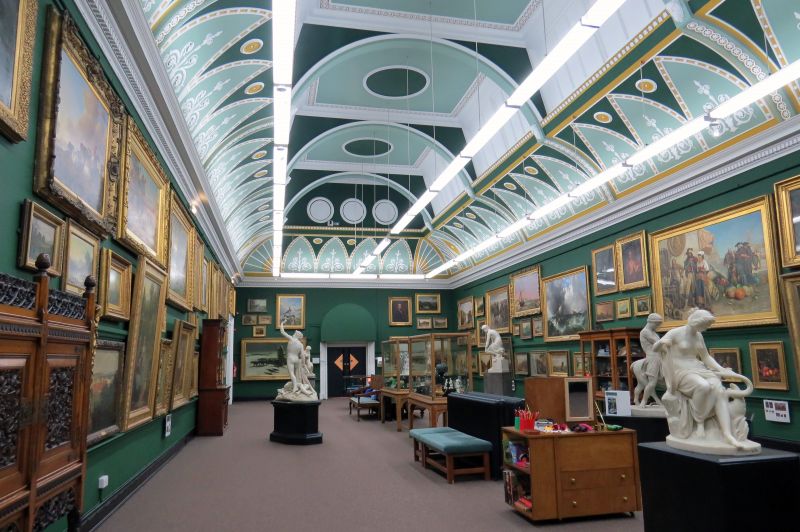 Museum, art gallery and library. 1852-7. By Travis & Mangnall.
Later additions 1878 and 1936-8. Brick with stone dressings,
Welsh slate roof. Italian Renaissance style, with outer
pedimented wings linked by long range of 4 bays with blind
upper storey.
EXTERIOR: entrances up steps in each wing, each in arcaded
portico with slim Corinthian columns and balustraded parapet
to balcony. Inner doors with side lights beneath pediment.
Inscription over left-hand doorway reads 'Langworthy Gallery
Erected AD 1878'. Central window in stone architrave above,
flanked by blind panels. Heavy modillion cornice running the
length of the building, above which, in each wing, a pediment
rises with arcaded decoration and terracotta panelling in the
apex. Between the 2 entrance blocks, the central range
comprises 4 segmentally-arched recesses with vermiculated
stone keyblocks to brick arches, each containing paired
round-headed 4-pane sashes, divided by a central stone
pilaster, and with a stone medallion in the spandrel. Single
4-pane sash window in stone architrave each side with stone
lunette over. Moulded stone string course over first floor
windows, its line continuing across the gabled entrance wings.
Renewed stairway inside left hand entrance, giving access to
top-lit upper galleries, the central of which has coved
plaster ceiling.
HISTORICAL NOTE: the building is on the site of a mansion
known as Lark Hill, which was converted for use as a gallery,
with the addition of north and south wings 1852-7 by Travis &
Mangnall. The main block of the mansion was demolished in
1936-8, leaving the wings, to which a new extension in similar
style was built, giving the building its present symmetrical
form.
(The Buildings of England: Pevsner N: South Lancashire:
Harmondsworth: 1969-: 391-2).