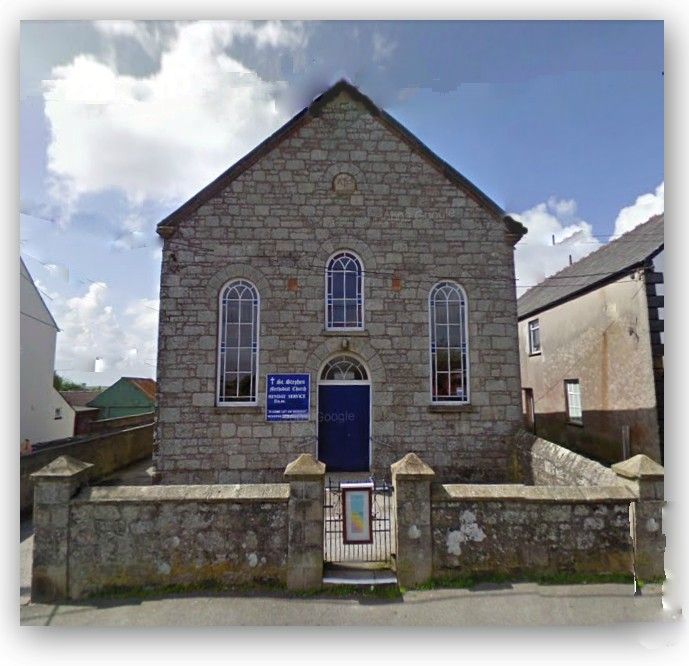 Nonconformist chapel and attached school. 1870 datestone, re-fitted 1890s. St Stephens granite brought to course and with granite dressings; state roof. Rectangular aisle-less plan with end gallery over entrance plus choir gallery at ritual E end plus organ within apse, now within later Cl9 schoolroom added at rear. Single-storey elevations; 3-bay entrance front with semi-circular arched openings including window over central doorway and tatter flanking windows. The windows, and fanlight over doors, have Y tracery and margin glazing; V-jointed boards to pair of doors. later windows to original openings to side elevations. INTERIOR has moulded ceiling cornices and ornate ceiling rose, the walls plastered and blocked out to resemble ashlar. Window openings have segmental pediments over pilasters. Pilastered and panelled gallery front has cast-iron inserts to panels and dentilled cornice above. The gallery has quadrant corners; its otherwise straight front stands on a moulded cornice and this is cantilevered out on brackets all supported by 2 slender near Ionic columns. There is a panelled screen to the entrance and stair hall. At the other end of the chapel is a choir gallery with similar detail to its flat front. The organ apse has a moulded eliptical arch and carved spandrels. FITTINGS of note include pilastered and balustraded 3-bay stepped rostrum with quadrant corners to the articulated front; communion rail in front of rostrum; 3-bay piped organ and pitch-pine pews with shaped ends. There are a number of similar classical-style chapels which date up to the 1870s in Restormel District, but this is one of the best examples.