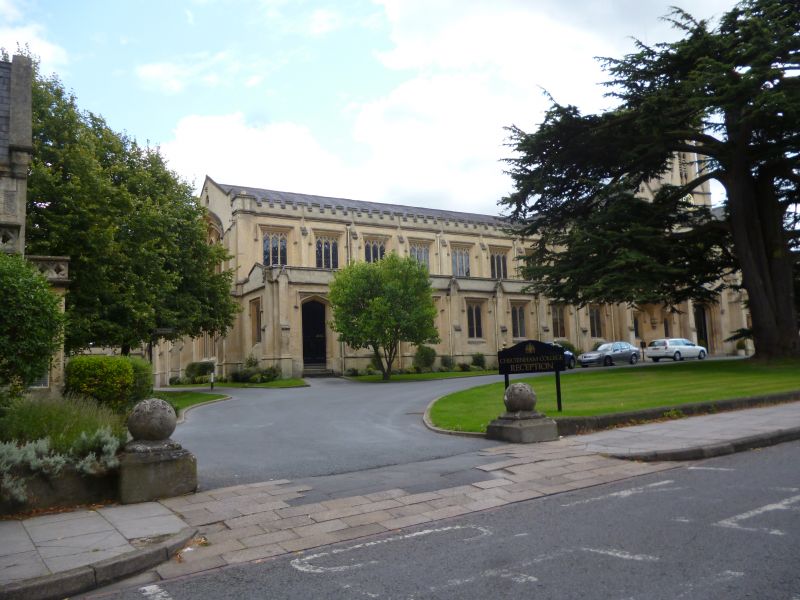 School. Main front to Bath Road, 1843 by J Wilson of Bath;
later additions to east. Later Dining Hall and Library of 1858
by DJ Humphris. Incorporates former junior school c1850 by
Middleton. Chapel of 1896 by Prothero with internal
decorations carried out by Boultons of Cheltenham; stained
glass by Louis Davis, Powell (1924) and Heaton, Butler and
Bayne; paintings by J Eadie Reid; monument by HH Martyn and
Company. Included is the stone fan-vaulted passageway between
the Main Block and the Chapel, c1920 by LW Barnard.
Ashlar over brick with slate roof. A notable composition in a
fitting 'Oxford Collegiate' style.
EXTERIOR: central 2-storey, 3-bay main range with attics to
outer gables and central tall clock tower, with 5-bay, wings
with aisles and clerestory to either side. Central entrance
has massive double doors in triple-chamfered, 4-centre-arched
surrounds with carved decoration to spandrels and hoodmould
with face-stops. Off-set buttresses between bays. Ground floor
has 2 + 2 cusped lights in chamfered surrounds and with
hoodmoulds. First floor: outer bays have canted oriels with
traceried windows, and surmounting battlements. Central
3-light traceried window with hoodmould and face-stops. Cusped
light to gables, copings and finial. Massive clock tower has
outer octagonal piers and central tall 2-light belfry windows
with tracery; frieze and battlements. Flanking wings have
off-set buttresses between bays. End entrances are double
pointed doors. 2-light cusped windows to ground floor and
3-light straight-headed windows with tracery to clerestory,
all in chamfered surrounds and with hoodmoulds. Low parapet to
aisles, crenellated clerestory. To left return a tall 3-stage,
27-light window with perpendicular-type tracery to head.
CHAPEL: Chapel in the Eton and King's Perpendicular-style

tradition. Stepped buttresses and crenellated parapet, with
finials and corner pinnacles. 4-light windows with one level
of transoms; the great 9-light east window has niched canopies
on the flanking buttresses and up the voussoir. Entrance from
school to south side, into chapel passage.
INTERIOR: retains many original features. Entrance has vaulted
lobby with 4-centred arch to stairhall with skylight,
open-well staircase has iron balusters with carved stone tread
ends and cinquefoil decoration and with cresting to
balustrade. Chapel passage (Barnard) has fan vaulting.
Interior of Chapel has quadripartite rib-vaulted ceiling,
reredos (designed by Prothero, work carried out by Boultons)
with figures of great men who had local connections (Jenner,
Tynedale, Raikes). Canopies to rear stalls (all carved) with
4-centred lunettes over (painted by Reid). Carved
Perpendicular-style pulpit and sounding board. Monument to
Frederick Myers (d.1901) designed by Prothero (carved by
Martyns) has tree of life and bronze relief portrait. 2
windows to S by Davis, one to north by Powell, E window by
Heaton, Butler and Bayne. Quadrangle has 4-centre-arched
loggia to E side. Dining hall (former chapel) has panelled
shallow vault on pilasters to full height; panelling to lower
stages of walls; 2 tiers of stained glass windows and 7-light
perpendicular-type window to W; 1945 war memorial. Assembly
hall (former junior school) has panelled ceiling and canted
bay to S.
HISTORICAL NOTE: Cheltenham College was the first of the new
public schools, originating in 1841 in Rodney Road, these
premises were built in the mid and late C19.
(The Buildings of England: Verey D: Gloucestershire: The Vale
and The Forest of Dean: London: 1970-: 134-5; Little B:
Cheltenham: London: 1952-: 114-7; Sampson A: A Cheltenham
Companion: Cheltenham: 1993-: 25-6).