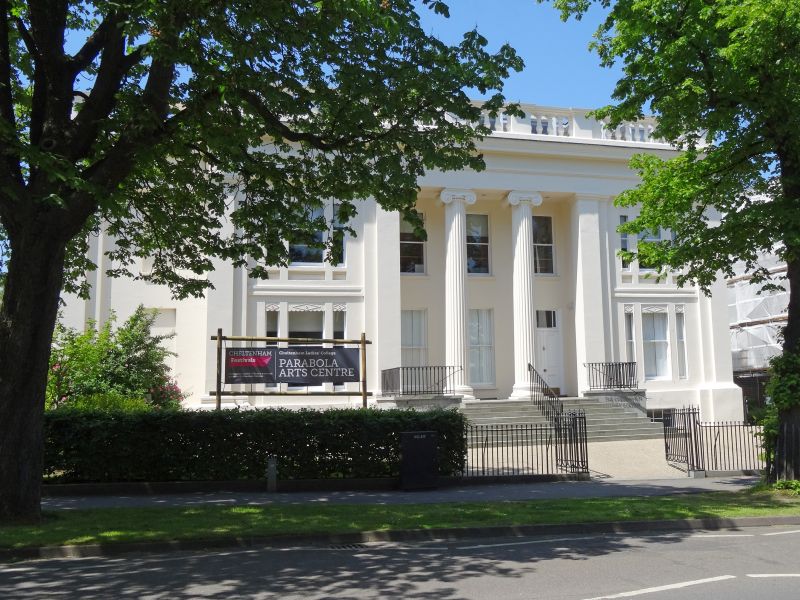 Semi-detached villa now offices. c1839-42, probably by Samuel
Onley, later additions and alterations including c1970s attic
storey and range to rear. Stucco over brick with slate roof.
EXTERIOR: 2 storeys with attics and basement, 5 bays. Bay to
left is set back and blind; entrance to third bay set back
behind 2 fluted Ionic columns and Doric pilasters clasping
angles. Entrance bay has 1/1 sashes, 2 to ground floor and 3
to first floor; entrance a 4-panel door with overlight.
Flanking bays have tripartite windows with 1/1 sashes, those
to first floor have aprons. Basement has 8/8 sashes. Left
return: 2 storeys, 3 bays, that to centre set back with
clasping Doric pilasters. Similar fenestration with flanking
tripartite windows having 1/1 sashes. Centre has 1/1 sash
above entrance, a 4-panel door with side-lights.
INTERIOR: not inspected.
SUBSIDIARY FEATURES: outer windows have blind boxes.
A bold neo-Classical design, similar to Killowen House, The
Limes and De La Bere House (qv).
HISTORICAL NOTE: the Bayshill Estate was developed by a joint
stock company which purchased land from the Skillicorne family
in 1837. By 1843 Henry Davies, in his Guide to Cheltenham,
described, 'a number of detached villas .. several of which
are occupied by resident families of affluence and station,
and others are in an unfinished state.'
Little considers this to be part of, 'a superb group (of
villas) that make Bayshill Road one of the great roads for
architecture in all England'.
(The Buildings of England: Verey D: Gloucestershire: The Vale
and The Forest of Dean: London: 1992-: 147; Little B:
Cheltenham: London: 1952-: 76; Hart G: A History of
Cheltenham: Stroud: 1965-1990: 172-3).