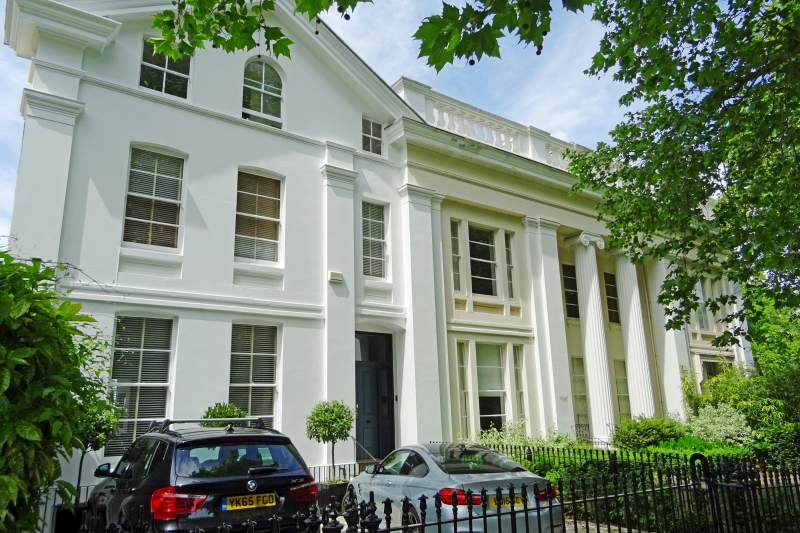 balustrade. Concealed attic dormers.
INTERIOR: includes staircase to house at left (Killowen House)
with stick balusters and lion-paw 'newel', otherwise not fully
inspected.
SUBSIDIARY FEATURES: stick balusters to sides of steps to
entrance to 4th bay and across basement to main facade and to
entrance on return.
A bold neo-Classical design, similar to Bayshill House and
Lingwood House (qv).
HISTORICAL NOTE: the Bayshill estate was developed by a joint
stock company which purchased land from the Skillicorne family
in 1837. By 1843 Henry Davies, in his Guide to Cheltenham,
described 'a number of detached villas .. several of which are
occupied by resident families of affluence and station, and
others are in an unfinished state.' By c1845 the company was
bankrupt and architect, Samuel Onley bought much Bayshill
property so Verey suggests that other houses in Bayshill Road
were built to his designs.'
Little considers this to be one of a `superb group (of villas)
that make Bayshill Road one of the great roads for
architecture in all England'.
(The Buildings of England: Verey D: Gloucestershire: The Vale
and The Forest of Dean: London: 1992-: 147; Chatwin A:
Cheltenham's Ornamental Ironwork: Cheltenham: 1975-1984: 51;
Little B: Cheltenham: London: 1952-: 76; Hart G: A History of
Cheltenham: Stroud: 1965-1990: 172-3).