Church of St Margaret of Scotland

A Grade II Listed Building in Richmond upon Thames, London 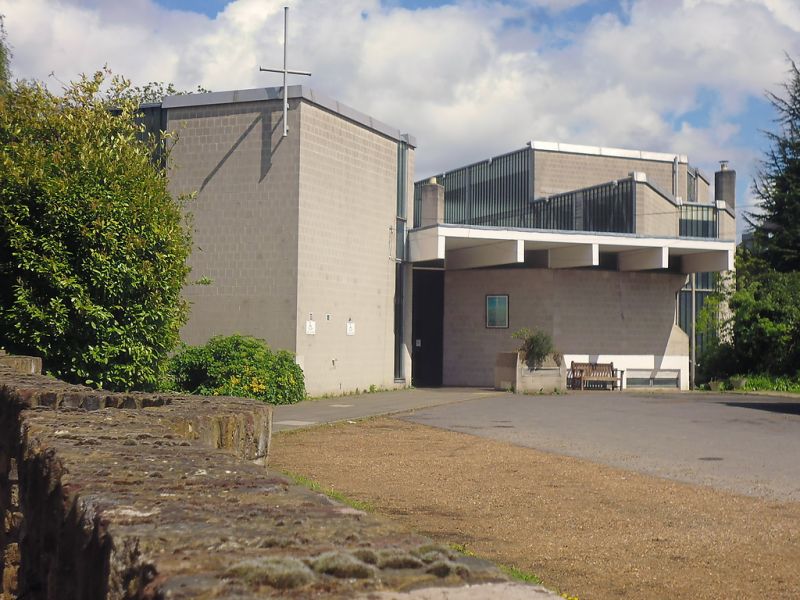 Roman Catholic Church. 1968-9 by Austin Winkley of Williams and Winkley. Forticrete concrete block walls, with steel trusses supporting flat roofs. Modern movement style, inspired by the latest liturgical thinking of the New Churches Research Group. Set at the back of a narrow site, incorporating the basement area from a Victorian villa previously on part of the site, the plan comprises a sunken vestry, office and boiler room, with above it a weekday chapel, with the main worship area to the rear and a large hall and balcony reading room, the complex entered by set-back doors placed off-centre and with a separate access to the hall from the left side. These volumes are expressed as a series of linked, square blocks with cut-off corners, an idiom repeated by Winkley in his later churches but here novel. Patent industrial glazing in long strips with frosted glass, save for two stained glass windows to the baptistry and sanctuary area by Patrick Reyntiens, the latter an abstract rendition of the Second Coming. Full-height black stained double doors with glass panels and overlight at entrance; black stained doors with more glazing to the hall. Tiled hallway has stairs to basement rooms under glazing ceiling giving borrowed light from the hall. To right, carpeted steps lead to the weekday chapel, which has Stations of the Cross, and a figure of Our Lady by Lindsay Clarke, a bequest from his prophetic friend Father Vincent Rochford to the parish priest Father Sidney Dommerson, who commissioned the church. There is a single confessIonal, of black stained timber in the chapel. Beyond is the main worship space, almost square, entered form the corner. A central axis, blocked by preferential pews, has a forward projecting octagonal sanctuary area at one end, and a baptistry at the other, under high roofs, lit by clerestory glazing above two lower roofs over areas of seating to either side. Freestanding altar comprising a wooden table top pierced by a consecrated stone alter, with matching birch ambo, celebrants chair and a two person marriage seat. The tabernacle is located in the wall between the church and chapel, a requirement of Cardinal John Carmel Heenan who was Archbishop of Westminster and the ultimate client authority at that time. Over the altar is a gilded crucifix by Stephen Sykes, a gift from the parishioners as a memorial to Father Sidney Dommerson, who died within a few days of the building completion. The font is a large vessel reminiscent of the Doulton firkins preferred by Maguire and Murray, Winkley's mentors, set in a sunken basin. Organ case behind the altar. Original pews and lightfittings. Both the church and the hall have black stained cupboard doors. The hall additionally has a beech floor and black stained wood surrounds, incorporating a bar. A glazed balcony area is used as a library and reading room.
This is the first church by Austin Winkley, who studied under Robert Maguire at the Architectural Association and was a member of the New Churches Research Group, founded in 1957 to promote a modern idiom appropriate to the ideas of the Uturgical Movement. The liturgical Movement, aimed at bringing the clergy and laity closer together both physically and spiritually in the celebration of worship, principally the Mass, and incorporating many ideas from the earliest years of Christianity, developed in France and Belgium in the nineteenth century and was influential in church design there and in Germany, Switzerland and elsewhere before being introduced to Britain in the 1950s. The meeting of the Second Vatican Council in 1962-5 saw the acceptance by the Roman Catholic Church of many of the movement's ideas, which produced a radical rethinking of design, expressing 'noble simplicity rather than sumptuous display'. This is an early and particularly well-made and well-detailed example of post-Vatican II planning.