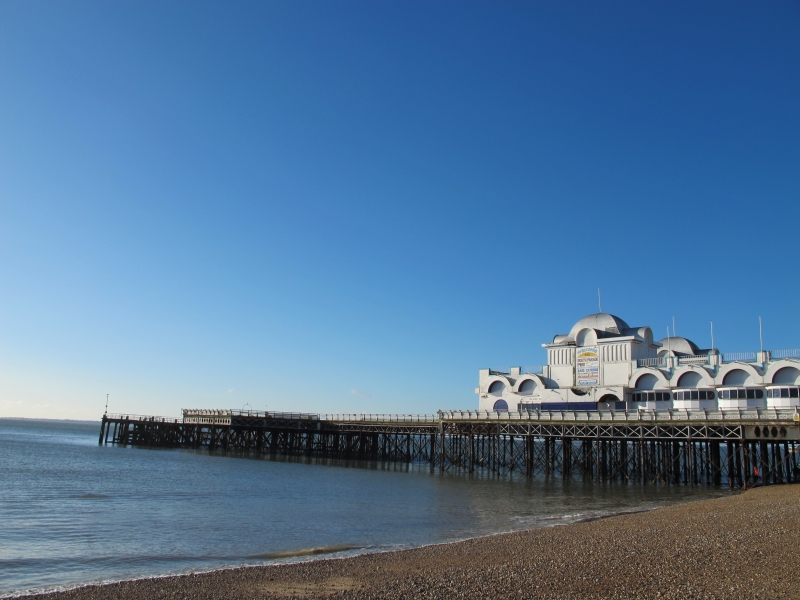 Pier. 1908. By GE Smith. Concert hall area rebuilt after
severe fire damage 1975. Iron, timber and stucco. Lead covered
flat roofs and curved roof to centre part.
EXTERIOR: 1 storey. Pier supported on iron columns with
outcurving iron rails to promenade deck with lower ornamental
iron panel between uprights. Entrance facing South Parade has
an open glazed canopy supported on cast-iron columns with
Ionic caps extending up to pavement with flanking octagonal
iron colonnaded kiosk, each with a scallop patterned leaded
dome. Entrance on left of pier buildings has four 3-leaf later
C20 glass doors, flanking kiosks, each with centre 2-leaf half
glazed door, shop window casement on left and 3-leaf casement
on right. At far left is an open entrance to promenade deck
with hipped roof supported on left side by a square iron
column with horizontal boarded side panel. At far right the
promenade is covered by a later C20 1-storey structure. 2
pairs of 2-leaf glass doors, parapet. At each corner is a
square timber horizontal boarded tower rising from roof level
each with a timber balustrade on 4 sides set between wide
timber corner posts with curved weathered caps, projecting
timber dentils below balustrade. Set back from balustrade is a
square window tower with on each side a 3-light casement set
under timber segmental arch, cornice and low pitched pyramidal
roof. On left return facing east the promenade deck extends
southwards opening to full width of pier from south end of
Concert Hall leading to octagonal promenade area (former
bandstand) at far end. The right hand part has, on right
adjacent to promenade entrance and on far left, a 3-light
casement set under segmental timber arch with flanking splayed
pilasters and set within a recessed panel. At centre is a
5-light casement set under flat arch, fascia and over centre 3
lights is a round-headed casement, timber pediment at roof
level. On far left of right part is a timber tower similar to
that on right at main entrance (similar towers also at corners
of opposite west elevation). Recessed central part has on left
and right a large tripartite transomed bow window, fascia and
cornice. Right bow has 2-leaf door at centre. At centre is a
large 3-leaf casement and to left of left bow a 2-leaf door.
Doors and windows flanked by boarded timber pilasters each
with moulded cap and base. Then on left is the 1975 rebuilt