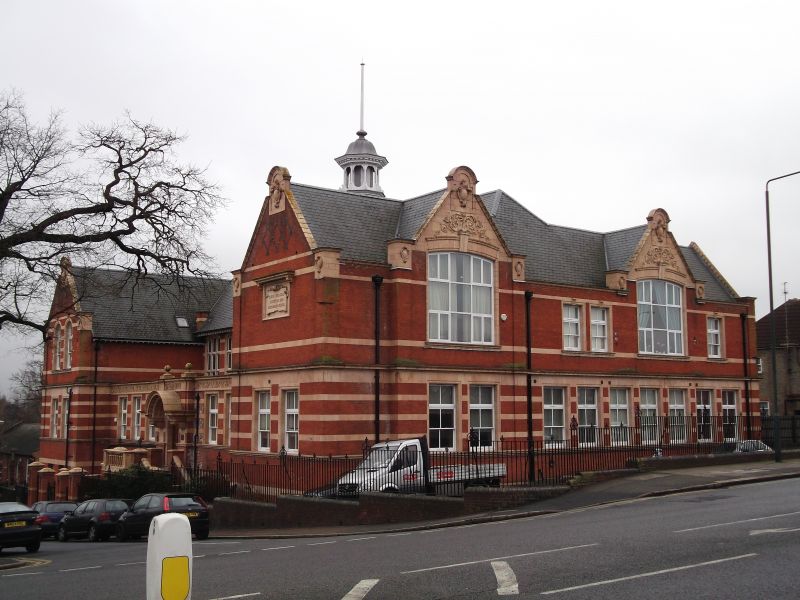 Built as technical institute and secondary school, later college of technology and includes attached wall with railings, gatepiers and gates. Built in 1906 by W Egerton, probably the council architect, in Queen Anne style. Built of red brick with cream tile and terracotta decoration and slate roof with brick and tiled chimneystacks and central copper and wooden cupola. Two or three storeys; 11 windows to front elevation along Holly Hill Road, 9 windows to northern elevation along Erith Road and 8 windows to southern elevation. Windows are sashes, mainly three tier vertical sashes. Front has recessed centre of 7 bays and two projecting ends with two bays. Centre has first floor segmental-headed arched windows lighting central hall and single storey wing in front with floral terracotta frieze and central doorcase with curved hood bearing the date 1906. This is approached up a double staircase with terracotta balusters and cast iron light fittings. Attached to the front is low red brick walling with cast iron panels with red brick piers with stone caps, and cast iron gates between. The wall and panels are stepped along Upper Holly hill Road and part of Erith Road because of the change in levels. The left side gabled wing has three storeys (the additional one a basement because of the sloping site. There are two windows per floor. The side elevation has two truncated gables with windows of Venetian type to top floor, 8 windows below and original windows to ground floor level although two later C20 doors have been inserted into original openings. The right side gabled wing has a tablet on the gable inscribed "Erith Technical Institute and Secondary School" and two windows on the ground floor. The front to Erith Road has nine windows on the ground floor. The first floor has two large windows, designed to house the art departments, retaining original glazing bars of 9 large panes to each window, each topped by a gable containing elaborate moulded tiled decoration. There are two small windows between and one to the right. The rear elevation is of stock brick with red brick dressings, includes two gables and retains original windows. Interior has full-height central hall with original roof of hammerbeam type, balcony on three sides and two staircases to the rear of the wings.