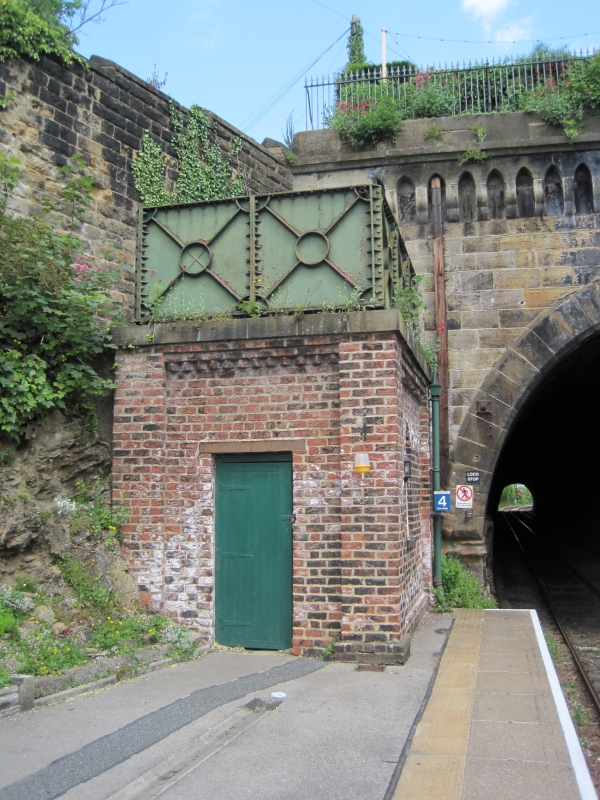 Railway station water tank. 1851 for the York and North Midland Railway, manufactured probably by James Walker of Leeds. Cast iron and brick. Rectangular plan brick base with thicker corner piers which support a 3 x 2 panel cast iron tank. The short side of the base has a plain entrance door, the long side an arched window with 3 x 4 panes in a cast iron frame, stone cill. Other elevations are hidden. INTERIOR not inspected. This building forms part of an important group of railway buildings with the immediately adjacent Knaresborough station and tunnel and the signal box and viaduct at the other end of the platform. History: Knaresborough station was opened in 1851 when the connections south to Leeds and north to Thirsk and York were completed. The Leeds-Thirsk line was built by the Leeds and Thirsk Railway, later the Leeds Northern Railway. The line to York from the junction just north of the tunnel was built by the East and West Yorkshire Junction Railway. This last was taken over by the York and North Midland Railway ion 1851 just as the Knaresborough connection was being completed. The line through Knaresborough was worked by the York, Newcastle and Berwick Railway meanwhile but all came together when the North Eastern Railway amalgamated all constituents in 1854. References: Leslie James, A Chronology of the Construction of Britain's Railways 1778-1855, Ian Allan, 1983. Christopher Awdry, Encyclopaedia of British Railway Companies, Patrick Stephens Ltd., 1990. Bill Fawcett, A History of the York-Scarborough Railway, Hutton Press, 1995, p 118, shows a larger example of the same type of tank at Malton station on the Y and NMR which was built in 1845.