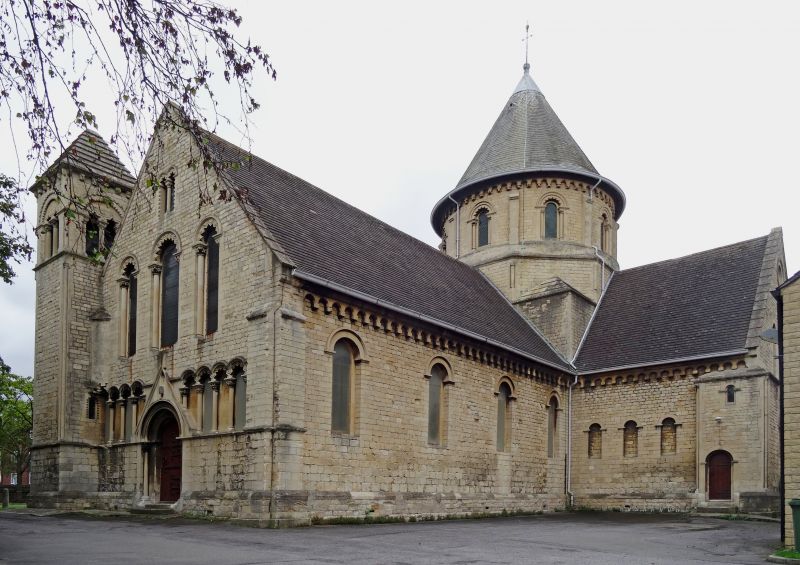 Parish church. 1847-8. Architect, SW Daukes; builder, Thomas
Haines. West window of 1858, by William Wailes. Cost »4,838.
Stone with plain tile roofs. Romanesque style. Cruciform plan
with large central dome.
EXTERIOR: tall central crossing tower with circular upper
stage and conical roof. 4-bay nave, wide transept, short
chancel and apse. Windows: single-light windows with cogged
moulding to heads and round-arched hoodmoulds. East end has 3
tall round-arched lights. Tower has twin belfry openings with
central column and round arch, pyramidal roof.
INTERIOR: Norman style with chevron tower arches and dome. Use
of semicircular arch bracing to the roof is in harmony with
the 'Classical' forms of the Romanesque style used. Galleries
in the north and south transepts and to west end supported on
wooden columns with scalloped capitals. Neo-Norman
plaster-work.
Goodhart-Rendel considered this a 'really a great success'.
Teresa Sladen has described this as 'an important early
Victorian church on account of its unusual and early use of
the Romanesque style, (relating to) indigenous examples ..
such as the Round Church at Cambridge, restored in 1841 and
extravagantly praised by The Ecclesiologist'.
HISTORICAL NOTE: Daukes took over The Park development from
Thomas Billings.
(Sampson A and Blake S: A Cheltenham Companion: Cheltenham:
1993-: 119; Blake S: Cheltenham's Churches and Chapels AD
773-1883: Cheltenham: 1979-: 30-31; The Buildings of England:
Verey D: Gloucestershire: The Vale and The Forest of Dean:
London: 1970-: 130; Sladen T: Notes: 1995-; Howell P and
Sutton I: Faber Guide to Victorian Churches: London: 1989-:
25).