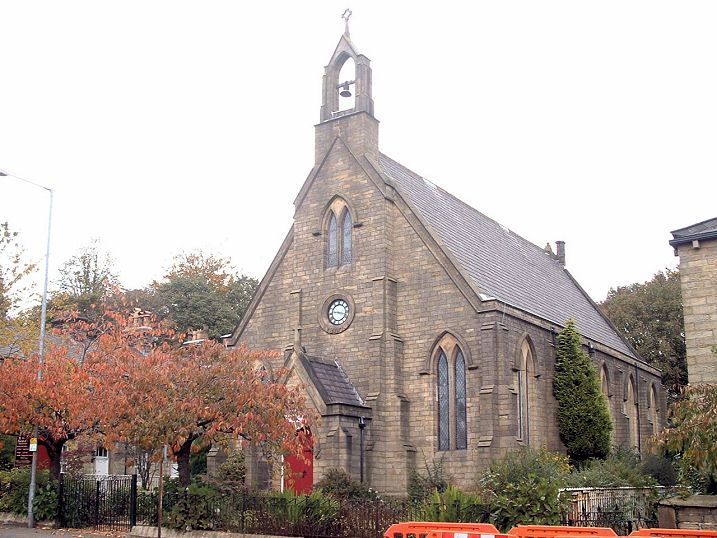 Anglican church. 1846-57. James Greenhalgh, architect. Ashlar,
with steep slate roof. Nave with western bellcote and shallow
chancel. Early English style.
EXTERIOR: steep western gable, with advanced and buttressed
central section, from which a gabled porch projects. Simply
moulded arched doorway, with corbel heads to hoodmould. Clock
in raised dated panel above the porch, and paired lancets
beneath a single hoodmould above. Similar paired lancets each
side of central bay. Bellcote on gable. North and south walls
divided into 5 bays by buttresses, with paired lancet windows
in each bay. Shallow chancel, with stepped triple lancet east
window, and vestries each side.
INTERIOR: single span roof over nave with no aisles. Complex
queen post trusses with arched braces to tie beam, and
traceried panels each side of and between queen posts.
Western gallery with foiled panelling. Similar panelling to
original pews which retain doors. Choir stalls form part of
the same scheme, with openwork enriched tracery to front row
and poppy heads at each end. Altar rails and pulpit also form
part of the same scheme.
Very plain chamfered chancel arch, and plain roof with purlins
to chancel. Encaustic floor tiles in chancel, and foiled
piscina and sedilia. Wren organ on western gallery.
Stained glass in east window as memorial for WW II, and some
armorial glass in south-east nave window; the rest plain.
(BOE: Pevsner N: South Lancashire: Harmondsworth: 1969-).