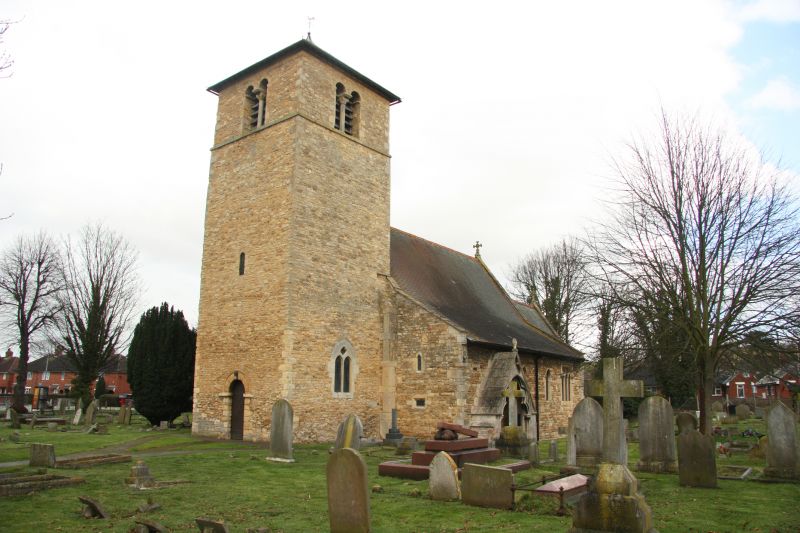 Church. C11, C13, C14. North aisle, north transept and vestry,
and probably south porch, 1875, by J L Pearson. Tower raised
and reroofed 1892 by C H Fowler. Restored 1895 and C20.
Coursed rubble and dressed stone, with ashlar dressings and
plain tile roof. Coped gables with crosses.
PLAN: west tower, nave, north and south aisles, north
transept, vestry, chancel, south porch.
EXTERIOR: west tower, 2 stages, has long-and-short quoins,
string course, south-east buttress and pyramidal roof. To
west, a round headed doorway and above it a round headed
light. To south, a renewed C13 double lancet. Bell stage has
double round headed openings on each side with round shafts
and various early Romanesque capitals.
North aisle, 2 bays, has to left a C19 5-light window with
hoodmould, and to right a reset C11 blocked door. West end has
a stepped-headed C19 4-light window.
South aisle, 4 bays, has to the right of the porch 2 single
plain lancets and to their right a C14 ogee headed 3-light
window, all with hoodmoulds. East end has a C14 ogee headed
2-light window. West end has a reset rectangular window and a
small lancet above it.
North transept gable has 2 lancets. Lean-to vestry has a large
stepped gabled side wall stack, flanked by a C13 style door
and a 2-light window. East end has a transomed 2-light window
with hoodmould.
Chancel, 3 bays, has a stepped 3-light window at the east end
and 3 single lancets to south.
Decorated style south porch has a slab roof and cusped
openings with shafts. Inside, a rib vault and restored C11
doorway with dogtooth band.
INTERIOR has a C11 tower arch with imposts and glazed wooden
screen, 1968. Nave arcades, C13 and 1875, 3 bays, have round
piers with 4 ringed shafts, keeled responds and double
chamfered arches with hoodmoulds. C19 arch braced crown post
roof. North aisle has north and west end stained glass
windows, 1888, and a segmental pointed arch at the east end.
South aisle has stained glass east window, 1883, with a plain
bracket to the right. South side has a stained glass east
window, late C19, and a chamfered C14 tomb recess. To west, a
memorial window, 1917. Both aisles have C19 lean-to roofs with