Former Chapels at the Old Cemetery 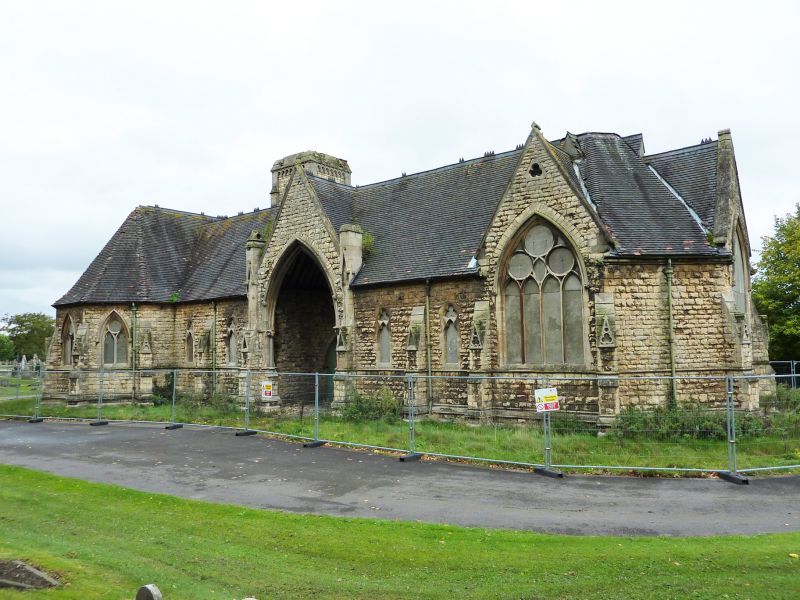 Pair of former chapels, now disused. 1856. By Michael Drury.
Coursed and squared rubble with ashlar dressings and plain
tile roof. Gothic Revival style with pointed arched windows
and Geometrical tracery.
EXTERIOR: chamfered and moulded plinth, sill band, moulded
eaves, coped gables with crosses and finials.
North side has a central gable with an archway and shafts,
flanked by single gabled buttresses. Beyond, single blocked
3-light windows.
To left, the octagonal east chapel has angle buttresses and 3
gables, each with a 4-light window. Roof gablets. Fleche
removed.
To right, west chapel with apsidal end and buttresses, 3 bays,
with six 2-light windows with hoodmoulds. In the north gable,
a 5-light window.
Square north-west tower, 3 stages, has to north a gabled
doorway with shafts. Above, a trefoiled vescia piscis and to
east, a 2-light window. Third stage has a foiled corbel table
and to north, a rose window. On the other sides, 3-light
windows. Spire removed.
INTERIOR: east chapel has an arch braced conical roof with
collars forming a corona. West chapel has a moulded stone arch
to the apse, and an arch braced double purlin roof. Both
chapels have foliage corbels.
The cemetery was laid out by Henry Goddard.
(Buildings of England : Lincolnshire: Pevsner N: Lincolnshire:
London: 1989-: 502-503).