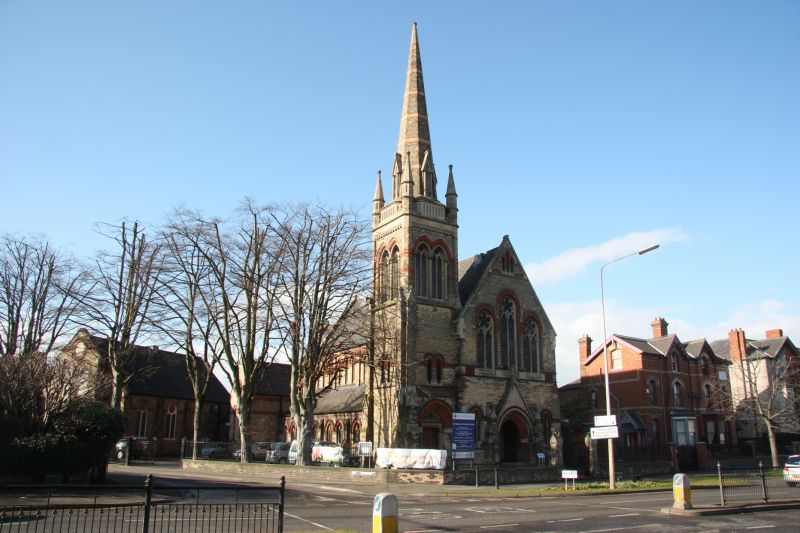 Former Methodist church and adjoining church hall, now a DIY
warehouse. Church hall, formerly school, 1881 and church 1887,
by Charles Bell. Tower and spire 1908 by Withers & Meredith of
London. Grey brick, with red brick and stone dressings and
slate roofs. Early English style.
PLAN: nave with clerestory and aisles, chancel, transept,
south-east tower and spire, attached hall to south-west.
EXTERIOR: pointed arched windows. Chamfered plinth, moulded
sill band, dentilled eaves, coped gables.
Nave, 4 bays, has dividing pilasters, and 3 single lancets in
each bay on either side. West end has a stepped triple lancet.
North aisle, 5 bays, has buttresses and a 2-light window in
each bay and at the east end, all with linked hoodmoulds.
South aisle is similar, but with 4 bays.
Chancel, single bay, has to north 3 lancets in the clerestory.
Coped east gable has string courses and cross, and single
gabled buttress. Central roll moulded doorway with shafts and
hoodmould, flanked by single lancets. Above, 3 graduated
2-light windows, and above them, a smaller roll moulded
3-light window.
Transept, to south-west, has 2 single lancets and above them,
moulded round windows with hoodmoulds.
Square tower, 3 stages, has gabled angle buttresses to the 2
lower stages, chamfered and moulded string course, and
billeted corbel table. East side has a shouldered doorway with
moulded surround and enriched tympanum. Second stage has to
east and south, 2 lancets with linked hoodmoulds. Recessed
third stage has 2 cusped 2-light openings with shafts on each
side, and octagonal corner shafts topped with spire pinnacles.
Moulded blind arcaded octagonal drum, carrying a set back
octagonal spire with brick bands, 4 blank gabled lucarnes and
finial.
At the west end, a gabled corridor forming a link to the
church hall. Hall has buttresses and cogged impost band. Each