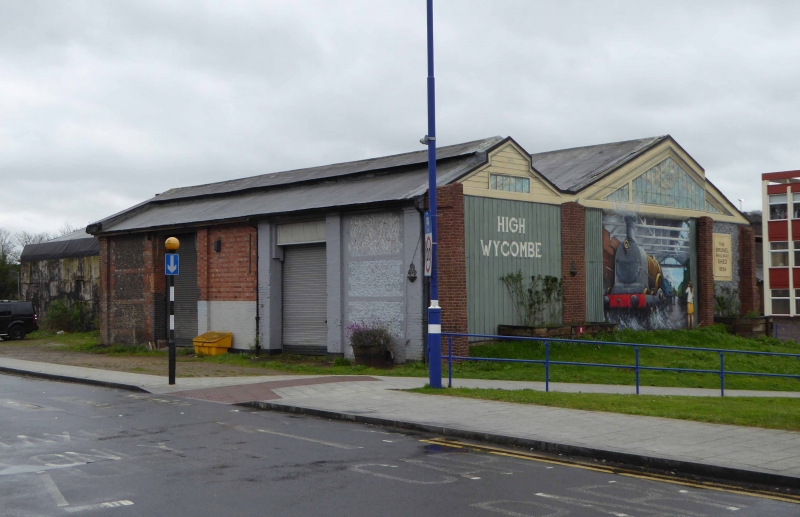 Railway terminus station and engine shed, later goods shed, now in commercial use. Built in 1854 by the Wycombe Railway, designed probably by one of Brunel's assistants, but to a basically Brunel design. The sheds are timber framed with brick cladding and with Welsh slate roofs, the offices are knapped flint with red brick dressings, heightened wholly in red brick. The plan is a long rectangle with a gabled train-shed with offices on the south (down) side and an engine-shed and covered platform on the north (up) side. These buildings date from different periods, see History below.
The south elevation has along panelled brick wall divided by piers. This is in twenty two bays (from the left 6 : 11 : 5 ; (6 from c1870, 11 from 1854, 5 from the 1860s). The first four bays have a 4 x 3 segmental headed window, the fifth a doorway with hood over, the sixth another window, the next six bays are blind, but two have rolling shutters over doors which gave direct access to the platform from its life as a goods shed. The offices project in front of the next five bays. These have six windows in the C19 ground floor, two tripartite ones, the rest are casements, all are replacements. Above are one single light, two 2-light and one 3-light window. The roof is hidden behind the parapet, three brick stacks. Single storey toilet to the right of this with another window in the train-shed wall behind. Then comes a blind bay, another with a window and finally two more blind bays.
Gabled west end with pilasters framing the trainshed entrance, blind gable end to the up platform.
The west gable is blind.
The north wall is more evenly divided by brick pilasters. There are entrances in the third, sixth, ninth, thirteenth, fifteenth, nineteenth and twenty-first bays counting from the left, the others are blind. The roof has a number of different pitches and sections depending upon when it was built. The engine shed still has the smoke louvre in evidence. The old goods shed section still has the characteristic Brunel type ridge stack.
Interior: The trainshed is particularly noteworthy being a classic example of a widespan all timber roof with eleven large queen post trusses with a continuous roof light down the centre. These trusses are supported on carved hardwood brackets all still in place. The roof was extended to the east with another three trusses in similar manner. The original gable screen partly glazed with original glass is also still in position and has been incorporated into a fourth truss. The engine-shed roof has four plain queen post trusses but all the rafters and boarding etc also appear to be original. There are no details of the other interiors.
History: The Wycombe Railway was opened from Maidenhead in 1854. It was engineered by Brunel and was worked by the Great Western Railway from the beginning. It was taken over by the GWR in 1866. The line had continued on to Thame in 1862 and at this time the station at High Wycombe was rebuilt on the through lines to the north and the old station became a goods shed. It was enlarged at this time and again in c1870 when parts of the old goods shed were added to the west end. It was altered again in c1900 and continued in railway use until 1967 when the goods service was withdrawn. The line was finally closed in 1970.
References: Mike Jolly and David Lane, The Wycombe Railway Terminus, produced privately.
GWR Official Drawings of the station at Thame which was identical in design and size.