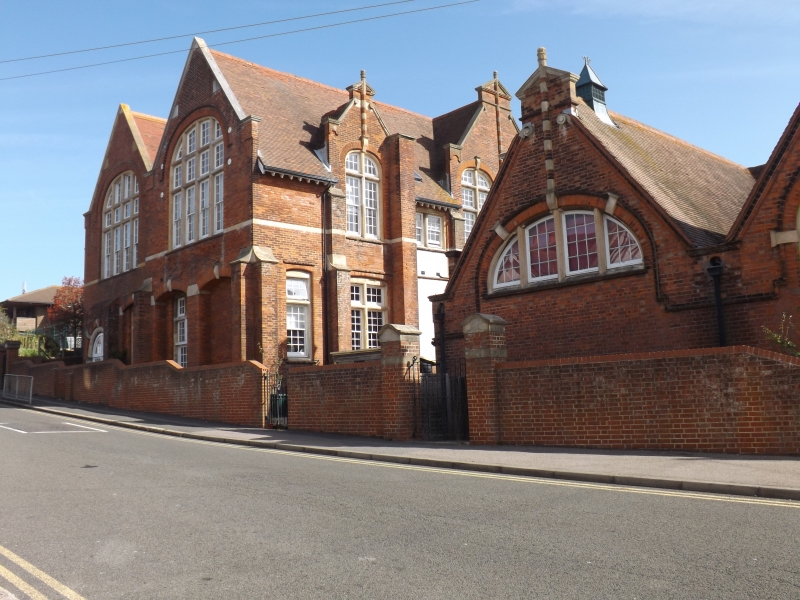 II
Board School, later used as music centre. Built in 1890 for the Hastings School Board by Frank H Humphrey of Hastings. In Queen Anne style. Built of red brick with stone dressings and tiled roof with elaborate lead ventilation louvres and brick chimneystack. Main part of the school is of one storey and the plan is a large hall running south west to north east with two classrooms on either side with a schoolmaster's house of two storeys to the south west where the entrance is situated.
EXTERIOR: South east front has two storey schoolmaster's house to right hand side with hipped roof, one semi-dormer with round-headed window and sixteen pane sash to left. Moulded brick stringcourse. Ground floor has three round-headed windows. Attached to the north east is an octagonal brick tower in three stages with tiled roof with metal finial. The two lower floors have one round-headed sash window. The upper or bell stage has paired round-headed openings with columns and wooden louvres. To the left of the tower is a pedimented gable with brick and stone rib and round-headed window with mullions and transomes, glazing bars and five stone keystones. Smaller similar gable to return and to end of this elevation which also has two brick buttresses. North west elevation has two large projecting pedimented gables with kneelers and brick and stone ribs. The right side window is a full-height round-headed four-light mullioned and transomed window. The left side one is a Diocletion window. South west front has two storey schoolmaster's house to left side with first floor round-headed window and ground floor penticed lean-to with window and projecting porch with cambered entrance. To the right are two gables, each having a wooden four-light tall round-headed mullioned and transomed window with glazing bars. North east front has two gables, the right side gable with pediment, brick and stone rib and kneelers, the left side one projecting and plainer but both having full-height four-light round-headed mullioned and transomed windows with glazing bars.
INTERIOR: Red and black chequered tiled corridor. Six bay hall with arch-braced roof on corbels. Each of the four classrooms is of two bays with arch-braced roof on corbels. Bolection-moulded fireplaces with brown tiles and firegrates and wooden cupboards. Former schoolmaster's house not inspected internally but tower staircase with cast iron balustrading was visible from the exterior.