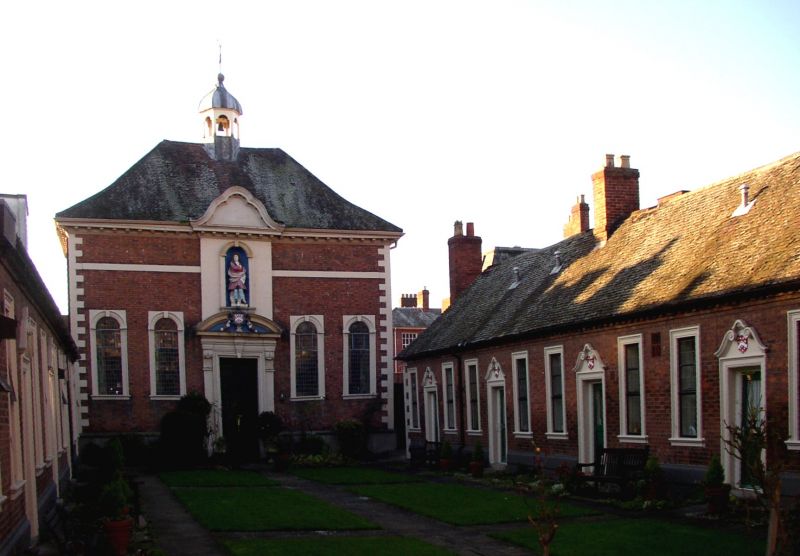 Almshouses with gatelodges, piers and gates adjoining.
1692-1703 with later additions and alterations including
extension of Late C18 to south gatelodge. Endowed by Robert
Berkeley of Spetchley. Pinkish-brown brick in Flemish bond
with ashlar architraves and hipped, plain tile roofs, that to
south gate lodge half-hipped; pinkish-brown brick ridge stacks
with oversailing courses and pots; wrought iron gates .
U-shaped on plan. North and south ranges alike, each of 5
dwellings, gatelodges to east with piers and gates between.
Gatelodges (facade to The Foregate): single-depth plans
originally. 2 storeys with attics, 4 first-floor windows each,
that to north has extension. Plinth; quoins to full height.
9/9 sashes where original; to south lodge the second
first-floor window is blind, to north lodge the third and
fifth windows to first floor and the second and fourth windows
to ground floor are blind. All windows in plain reveals and
with tooled architraves and moulded sills. Wide modillion
cornices. 2 roof dormers to each dwelling, with pedimented
gables and casement windows. Tall external rear and left side
stacks with oversailing courses and pots. Lead rain hoppers.
Entrances to inner returns: 6-raised-and-fielded-panel doors
in tooled architraves and with swan neck pediments and
armourial shield. Above entrance to south side a blind
opening, above entrance to north side a 9/9 sash, both with
tooled architraves. Right return (to Shaw Street): 2
first-floor windows. Each storey has 6/6 sash with cambered
arch.
Gates and piers (to The Foregate): central double gates
between tall, rusticated piers, square on plan and with
moulded cornices surmounted by llama heads. Gates have two
levels of bars and
dogbars and embellishments include scroll moulding between 2
sets of bars. Scrolled overthrow has 'BERKELEY'S HOSPITAL'
with mask and armorial shield at apex. Almshouses: north and
south ranges alike. Moulded plinth. Single storey, 10 windows
altogether, 2 per house. Central entrances: renewed
part-glazed doors in tooled architrave with swan-neck
pediments and armourial shield between. Replacement casement
windows in tooled architraves and with moulded sills.
Modillion eaves band.
INTERIORS: not inspected.
HISTORICAL NOTE: Berkeley's Hospital was endowed by Robert
Berkeley in 1692 for 12 poor men. The lodges were intended for
a chaplain and a warden.
The almshouses, gatelodges, piers and gates occupy 3 sides of
a courtyard, with the west side occupied by Berkeley's
Hospital: Chapel (qv), forming an important example of
Renaissance planning and one of the finest almshouse groups in
England.