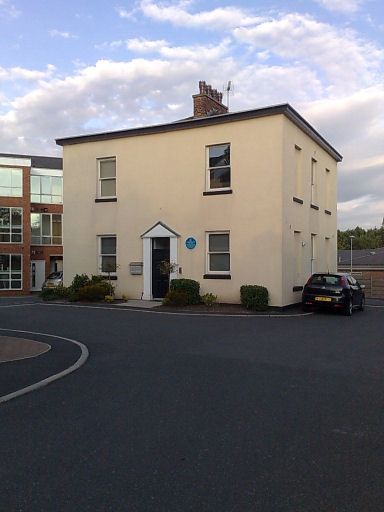 II
Former public house, but built originally as a gatehouse to a Millenarian scheme centred around Ashton-under-Lyne by John Wroe. 1825 with later alterations.

Exterior: red brick, painted to front. Slate roof. Main front with projecting recent extension to ground floor. Right-hand part of building comprises a formerly symmetrical square house with a pyramidal roof: this is of two bays to the entrance front and of three bays (the outer ones blind) to the right-hand return. The ground floor extension obscures the former entrance, which comprised a pedimented Ionic doorcase set between large windows. Segmental window arches remain on the side and rear walls. The left-hand continuation of the building, with two windows at first floor level, is contemporary with the rest of the building and is not an extension.

Interior: not inspected, believed to be considerably altered.

History: this is the only building to survive associated with the Millenarian visionary John Wroe (1782-1863). A successor to Joanna Southcott, Wroe founded a cult called the Christian Israelites which gained a considerable following in the 1820s: he prophesied that the sanctuary in which the godly would survive the Apocalypse should be built in Ashton-under-Lyne. In 1825 a grand sanctuary (now the site of the town's sorting office) and four gatehouses were built: this is the only building to survive from this unique instance of a built Millenarian scheme. Wroe's notorious behaviour led to his departure from Ashton in 1830 following an inquest held in this building, but his cult endured elsewhere, particularly in Australia. The building was subsequently used as a cholera hospital in 1832 (with associated burials believed to be in the vicinity) before becoming a public house in 1837, known as The Odd Whim. It changed its name to the Stamford Park Hotel in c1880. The ground floor front extension is of a late C20 date.

Wroe was the subject of the 1991 novel by Jane Rogers, 'Mr Wroe's Virgins'. A metal plaque has been erected by the Tameside Metropolitan Borough.

Assessment of importance: the Odd Whim is listed for special historical interest rather than for architectural importance, having undergone adverse alterations to its fabric. Nonetheless, it represents a unique survival of a building erected as part of a Millenarian scheme and is a remarkable reflection of popular religion during an epoch of social, economic and political upheaval.

[DNB, under 'John Wroe'; J.F.C. Harrison, 'The Second Coming' (1979); Edwin Butterworth, 'An Historical Account of the Towns of Ashton-under-Lyne, Stalybridge and Dukinfield' (1844); Winifred Bowman, 'England in Ashton-under-Lyne' (1960); Ed Green, 'Factors accounting for the Popularity of the Christian Israelite Church from the 1820s' (MA thesis, School of Social, Historical and Literary Studies, University of Portsmouth 2003).