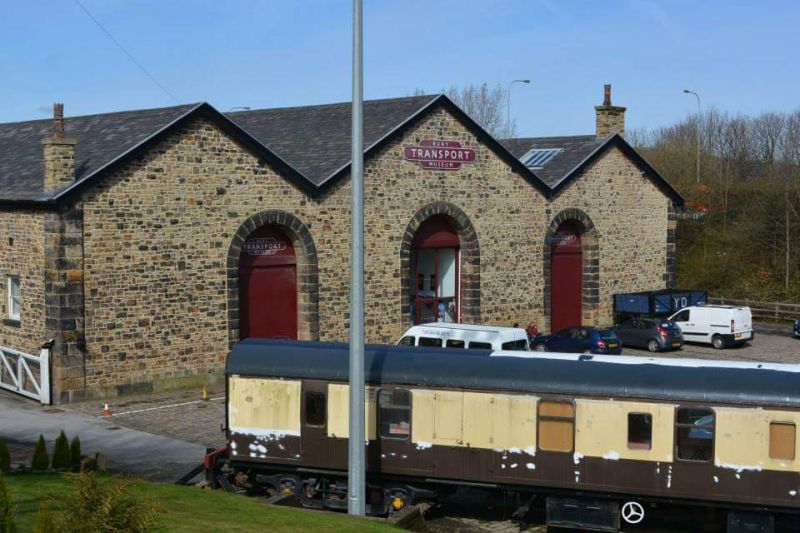 II
Transport Museum, formerly railway warehouse. c.1846, with minor C20 alterations. Erected for the East Lancashire Railway Company Ltd. as part of the company headquarters in Bury. Coursed rubble sandstone with dressed quoins and voussoirs and a Welsh slate roof covering.
PLAN: Rectangular plan, made up of 3 gabled ranges originally accommodating 2 internal trackways.
EXTERIOR: Front elevation composed of 3 linked gables, that to the centre with a wide central semi-circular arched opening with rock-faced dressings. The flanking smaller gables have similar, but narrower openings sited off centre towards the inner side of the bagle wall. The doorways have boarded double doors with vertical boarding to the arch heads. The 2 side walls and the rear wall are similarly detailed with 3 arch-headed doorways, and the north side wall has a 2 light mullioned window close to the north-west corner.
INTERIOR: The interior retains its former open plan appearance, with arcades of cast-iron columns supporting the tie beams and valley gutters of the triple-pitch roof. Each roof section has trussed formed from principal rafters with angle braces and vertical metal tie rods supporting single purlins. The original loading platforms and setted floor surfaces reamin in situ.
HISTORY: The goods shed is thought to have formed part of the original station complex developed in Bury c.1846. It is shown on the 1848 O.S. map of the town. The 1896 map identifies the building as the 'Goods Station' and show 2 lines entering the building 2 lines flanking the building, and a short section of track running parallel to the rear (west )wall linking these lines, presumably by means of turntables.

A well-preserved early large-scale railway warehouse of c.1846, later identified as a 'goods station' built to facilitate the covered storage and transfer of goods between the rail and road networks. In its scale and detailing, the building anticipates the form of later warehousing and transhipment buildings developed for the railway network.