The Main Office Block to the Linotype Works 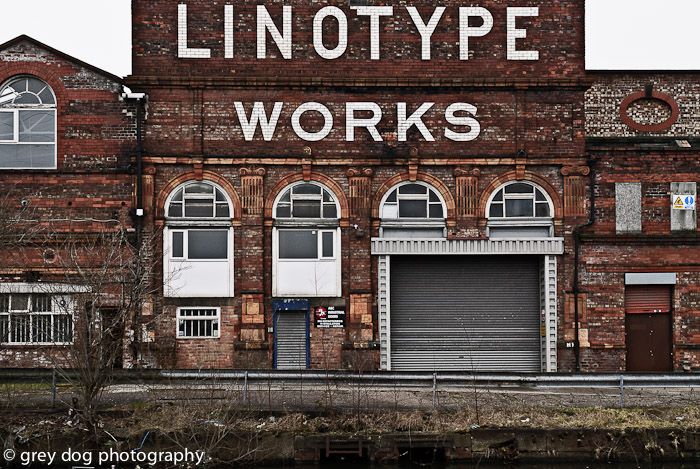 Entry Name: The Main Office Block to the Linotype Works

Office block to Linotype and Machinery Works. Dated 1897, with minor late C19 alterations. Built for the Linotype and Machinery Company Ltd. Red brick with buff terracotta detailing, roof concealed behind deep parapets.
PLAN: Stepped linear range, extending north south and forming the frontage range to an extensive workshop development to the west.
EXTERIOR: Symmetrical front elevation with 2-storeyed, 7-bay range to centre, and flanking two and single-storey ranges extending to north and south. Entrance bay slightly advanced with wide banded segmental arched opening below shallow 6-light rectangular overlight. Above, a 3-light mullion and transom window in moulded terracotta sits below a massive rectangular tower, surmounted by a pyramidal spire supporting a flagpole. The tower incorporates clock faces to each elevation set within keyed moulded surrounds, a deep frieze, moulded cornice and ornamental metal parapet railings. The three bays either side of the entrance have set-back mullion and transom windows to the ground floor, and curved 3-light windows supported on pairs of moulded corbels set immediately above the heads of the ground floor windows. The bays are delineated by shallow piers with foliated terracotta ornamentation at their heads. Moulded sill and lintel bands extend through the piers onto the return elevations and flanking ranges. Above the upper floor windows, a deep parapet rises above a dentilled cornice. Recessed panels within the brickwork incorporate the name of the company in tall white lettering - 'LINOTYPE MACHINERY' with the date 'A.D.1897' set in a similar panel on the tower, with 'AND' above and 'LTD' below. Set back 2-storey sections link the central range with longer single bay flanking ranges, all of which have window openings detailed in matching style to the main range. The single storey ranges have deep parapets incorporating decorative terracotta panels.
INTERIOR: Not inspected.

HISTORY: The Office Block was developed as part of an extensive manufactory established in 1896 on a 30 acre site to the south of the Bridgewater canal in Altrincham. The land was purchased from Earl of Stamford's Oldfield Estate and provided land not only for the extensive works site, but also for a development of 172 workers houses known as the Linotype Housing Estate. The Linotype factory employed hundreds of workers in the manufacture of printing machines, and its success led to the enlargement of the Broadheath manufacturing district, and the consequential growth of Altrincham's population in the early C20.
Sources: Nevell. M The Archaeology of Trafford.

A boldly-detailed and well-preserved office building of 1897 which forms the prominent centrepiece of a massive printing machine factory developed on a greenfield site in Altrincham. Its ambitious scale and the richness of its exterior detailing distinguish from many other commercial buildings of the period it from and its clock tower ensures its continued prominence in the landscape.