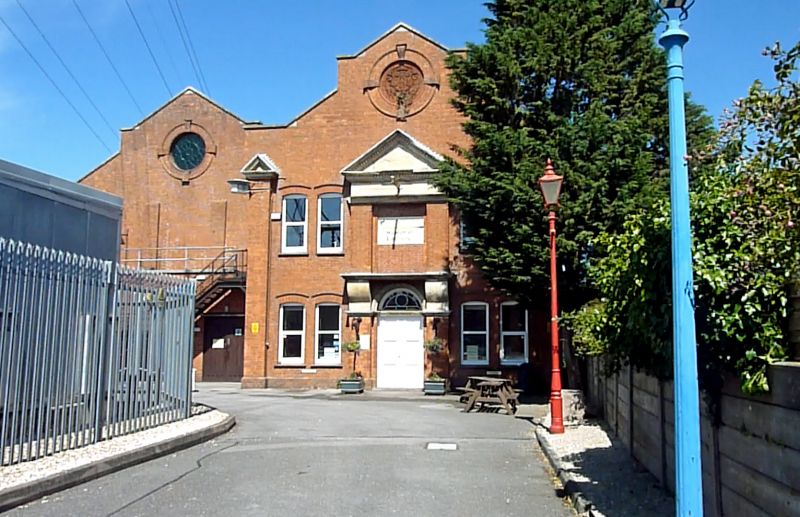 II
Electricity power station; now a museum of electricity. 1903; for the Bournemouth and Poole Electricity Supply Company. Red brick with stone and terracotta dressings. Slate roofs with ridge ventilators and parapeted gable ends with stone coping; partly re-clad in corrugated asbestos sheets.
PLAN: Two parallel ranges; the generator hall on the south with the entrance and offices at the west end with the battery room above and a shorter boilerhouse range to the north, with a later C20 single-storey extension in the north west angle. The boiler chimney has been demolished.
Late Victorian Italianate style.
EXTERIOR: 2-storey west front with twin gables. That on right 2:1:2 bays with corner pilasters with gablets, central 2-storey portico with round-arch doorway, panelled door and fanlight, large stone console brackets and large stone pediment above with dentils; segmental arch windows to right and left with late C20 frames; raised gable apex with moulded brick keyed roundel containing a terracotta cartouche with date 1903. Gable to left set back and with similar apex, but with occulus and with later C20 single-storey extension in the angle below. North side of boilerhouse has moulded brick eaves cornice, blind segmental arch to right and four bays to left with iron piers, formerly open and now with round arch windows. Rear east, two similar gables with raised apexes, each with occulus, left blind, that on right with tracery; brick pilasters and large segmental arch doorways, the right blocked.
INTERIOR: Entrance has glazed wall tiles and segmental arch doorways with tall keyblocks. The generator hall is open to an iron-tie roof structure and has an ornate cast-iron gallery on three sides on columns and with stairs at west end with similar ornate balustrades. Gantry on cast-iron columns and with travelling crane over inscribed Herbert Morris and Bastert Limited, Loughborough, Leicestershire. The boilerhouse has inserted floor, but the original iron roof and two blast doors remain. Of the original plant there is a carboniser for converting AC to DC and the engine room telegraphs on the landing of the gallery. The generator of 1905-6 is from a power station in Oxfordshire.
HISTORY: Christchurch Power Station was built in 1903 for the Bournemouth and Poole Electricity Supply Company as a generating station to serve the Christchurch part of the Company's area. From 1905 the power generated was used for the trams that ran from Poole in the west to Christchurch in the east, as well as for street lighting in Christchurch. When the National Grid took over in 1926 the power station was no longer required and was used as a sub-station. The sub-station became redundant in the late 1970s and the high voltage switchgear serving Christchurch was moved outside the building, which then became a museum of electricity. Bournemouth and Poole Electricity Company is an early supply company and its power station at Christchurch is one of the most complete early stations to have survived in England.
SOURCE: Museum of Electricity Guide, Christchurch Power Station.