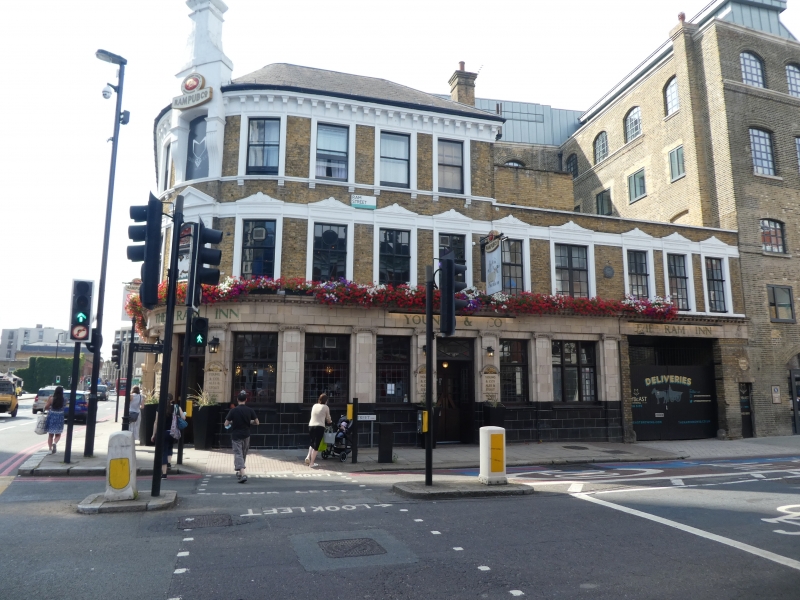 Public house, now also shop. 1883 with 1930s remodelling, for Young's Ram Brewery, formerly known as the Ram Inn. Yellow brick with plaster details, and glazed terra cotta ground floor. 2-3 storeys.
EXTERIOR: Curved wider bay to corner of Wandsworth High and Ram Street, with 4 window bays to each return at 2nd floor, additional 3-5 bays at 1st and ground floors with carriage entrance to north end at Ram Street and additional wide entrance to west end at Wandsworth High Street. Ground floor is 1930s glazed cream terra cotta; pilasters with flat ionic capitals defined each wide window bay; upper floors of 1883 build, the 1st floor windows within plastered architraves and under shallow scrolled pediments linked by continuous frieze, 2nd floor with shorter sashes also in plastered architraves and abutting corbelled eaves cornice. Corner bay with 'THE RAM INN' green lettering to frieze and flanked by glazed plaques with Ram detail under segmental arch and `Young & Co.'s Ales & Stout' over `Public Bar', entrance now blocked; slightly advanced upper storeys with pediment over 1st floor window; corbelled base of chimney to 2nd floor extending above shallow hipped roof. Entrances each to High Street and Ram Street flanked by similar terra cotta plaques.
INTERIOR: Ground floor retains beamed plaster ceilings. 1st floor has good neo-Elizabethan room with wood-panelled walls and honeycomb pattern plaster ceiling with foliate decoration; wide stone chimneypiece.
HISTORY: In 1831, Young & Bainbridge bought the Ram brewery from Tritton, who had owned the freehold for this site since the C19. The earlier pub on the site, the Ram, was replaced with this building after the major 1881 fire at the brewery damaged the earlier Ram Inn, believed to have dated from the late-C17. This was again damaged in WWII. The pub was called the Ram until being re-named the Brewery Tap in 1974. See list entry for the Grade II* Brewery for a fuller history.
SOURCES: Helen Osborn 'Britain's Oldest Brewery: The story behind the success of Young's of Wandsworth' (1999) and Bridget Cherry and Nikolaus Pevsner, 'Buildings of England London: South' (1983, 1994)

Listed as a handsome corner pub of 1883 with an 1930s remodelling including historicist interiors and that has particular interest as the brewery tap for the Young's brewery, as well as group value with the other listed components on the site.

Group value with the other listed components of the site: the Grade II* Brewery, Grade II former Brewer's House and the Grade II stables; as well as the Grade II late-C19 `Spread Eagle' public houses also across Wandsworth High Street.