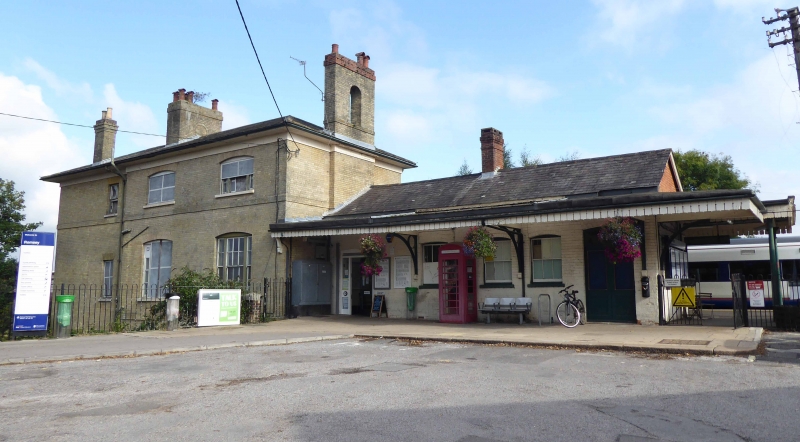 II
Stationmaster's house with attached ticket office, subway and waiting room. Romsey Station opened on 9th march 1847 and the eastern part of the stationmaster's house with waiting rooms dates from this time. The Stationmaster's house was extended to the west in matching style probably in the 1860s and the waiting room on the opposite platform was probably built by this time. Circa 1887 The Booking Hall was added further east, the platforms were extended and a subway was built. Classical style.
EXTERIOR: Stationmaster's House is of stock brick in Flemish bond with hipped roof with overhanging eaves and three brick chimneystacks, two of which had arches, one later filled-in. Because of the raised platform the building is of two storeys to the platform side and three storeys to the rear. On the platform side the original part has two multipane sashes to the first floor, one to the ground floor and entrance. The 1860s extension has three sashes with vertical glazing bars only, similar on the ground floor and two entrances. There is an attached verandah with wooden fretted canopy supported on cast iron columns. The single storey ticket office is also of stock brick (painted to the rear) has a gabled slate roof with red brick chimneystack and cambered sashes with horns. The wooden canopy stretches around three sides of the building, supported on cast iron columns to the platform sides and on large cast iron brackets to the other two sides. The rear elevation of the stationmaster's house has tripartite cambered sashes to the 1840s part, one second floor window modified in the later C20. The ground floor has a cambered opening and flight of stone steps set sideways to a private entrance. The 1860s extension has a cambered sash with verticals only and the left side elevation has three similar windows to the upper floors but the ground floor has round-headed arcading. Attached to the west end is a wooden platform extension of the 1880s and this is linked by the 1887 brick subway to the mid c19 one storey waiting room to the west end of the opposite platform. this is of brick and weatherboarding, weatherboarded to the front with four sashes in moulded surrounds with vertical glazing bars oonly and four-panelled door and an openfronted shelter to the east, both under a fretted wooden canopy supported on cast iron columns.
INTER: Stationmaster's House has at first floor level (opening on to the platform) a waiting room for passengers with plank panelling to dado height and dado rail and four-panelled door. The north east room on this floor has an original wooden fireplace and a further room has a wooden fireplace with pilasters and paterae. The top floor retains four-panelled doors, built-in cupboard and plaster ceiling rose.