Buildings at Stuart Crystal Glassworks (White House Complex) Including Newhouse Furnace Building, Former Engraving and Cutting Shops, Structures Attached to the South of the Cutting Shop and West of t 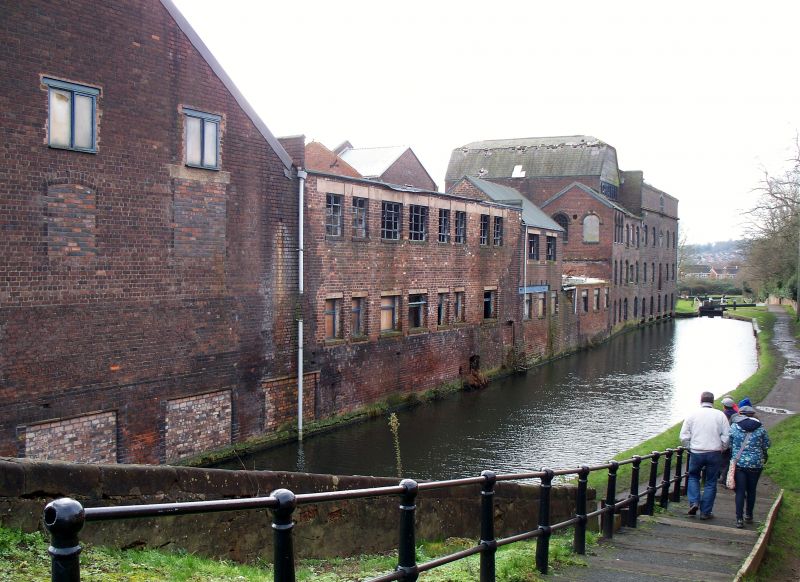 II
This listing includes a group of attached buildings that are described below individually with a shared statement of history and significance at the end.

Newhouse Furnace Building To NE corner of Vine Street immediate to N of Whitehouse Cone.
PLAN: Roughly rectangular plan, the long elevations facing east and west.
EXTERIOR: The south elevation faces a yard and Vine Street, the east High Street and the north directly adjoins the canal; the west elevation is abutted by buildings to the west. Two-storey gabled structure with some canal-level basement spaces. Although some early-C19 brickwork from a canal-side building remains in the lower section of the north gable end and the basement, the majority of the brickwork dates to c.1925, when the building was constructed to house the Newhouse furnace, with some later rebuilding on the south elevation apparently dating from the truncation of the building after the Whitehouse cone was demolished; sheet metal roof. South elevation has late-C20 sliding doors off-centre to left and a small mainly late-C20 lean-to outbuilding (the east wall of which dates to c.1925) attached to right. East elevation, which follows the slope of the road from north to south, has four in-filled segmental-headed windows to upper level. North elevation has four levels of openings, the three lowest all now in-filled, comprising from the bottom up wide rectangular openings at canal level; segmental-headed windows and 2 flat-headed door openings flanking a shorter segmental-headed one. Only the upper level of openings remains unblocked and comprises 3 late C20 casement windows.
INTERIOR: Now on 2 floors, the first floor which cuts across the in-filled openings on the east elevation and the third level of openings on the north is late-C20 as is much of the roof structure, only the principal steel trusses appearing to belong to c.1925. There are a number of spaces at basement level, with alongside the canal a long narrow space, which was probably the lowest level of the C19 structure, which appears to have extended further west than the existing building. The base of the Newhouse furnace survives virtually intact in the centre of the building. A brick-lined tunnel served this from the canalside and another tunnel extended north-west providing access to the base of the Whitehouse cone and possibly to an open yard. A short section of an earlier tunnel survives close to the base of the cone, which originally may have provided a way through the subsidiary structures on the north of the cone or have been part of a larger tunnel system extending to the canal. Part of the brick floor surface around the Newhouse furnace can be seen on the ground floor of the building and more may survive beneath the modern screed.
HISTORY: Originally constructed to house the Newhouse furnace, the building was most recently used as a dispatch warehouse.

While of limited architectural interest, this building has particular special interest as it is believed to be the only early-C20 glass kiln that nationally, and for the role it plays in the significance of the Whitehouse complex that represents technological changes in glass production over a wide period of time and on one site.

Former Engraving Shop
PLAN: Narrow rectangular plan, the long elevations facing north and south.
EXTERIOR: 3-storey flat-roofed brick structure directly adjoining west side of Newhouse furnace building, much altered and rebuilt in C20 but the earliest parts (the low-level brickwork alongside the canal and parts of the south and west walls) are early-C19 and probably part of a larger structure, elements of which survive in the Newhouse furnace building. Above the C19 brickwork on the canal elevation are 2 tiers of window openings with concrete lintels (c.1925), 8 to the upper level and 7 to the lower, all symmetrically arranged. The building has been extended southwards to join Former cutting shop.
HISTORY: Reputedly built as an engraving shop, the building was most recently used as part of the packing operation.

Former Cutting Shop
PLAN: Narrow rectangular plan, the long elevations facing north and south, the north elevation attached to Former engraving shop, the east to Newhouse furnace building.
EXTERIOR: Late-C19 brick building originally with narrow open spaces between it and earlier buildings to the north and south. Originally single storey, between 1919 and 1938 the building was raised in height and extended to join structures to the south; late-C20 metal sheet roof. All elevations are obscured from view by attached buildings and originally external features are therefore described with the interior.
INTERIOR: At ground-floor level a short section of the early south wall remains together with segmental-headed openings (probably originally windows) in the north wall. C20 timber floor structure with cross-beams and an irregular pattern of later posts, reputedly quickly installed when the floor began to collapse under the weight of storage above. Decorative corbelled brickwork to the original west gable end survives below the line of the existing roof.
HISTORY: The building was reputedly constructed as a cutting shop but was later converted into a warehouse.

Electric-powered former cutting shop
PLAN: Rectangular plan, the long elevations facing north and south, the western part of the north elevation attached to a mid-C20 building running north-south.
EXTERIOR: Two-storey red brick structure, built between 1919 and 1938, the east wall rebuilt in late-C20 after the truncation of the Whitehouse cone with window on each floor facing the yard; despite alterations the original fenestration pattern is still discernible on the south side, the first-floor windows cast-iron, those on the ground floor now timber; late-C20 metal sheet roof.
INTERIOR: Metal truss roof with timber purlins.
HISTORY: The building was constructed as an electric-powered cutting shop but recently has been used as offices and for storage.

HISTORY of Whitehouse Complex: The Whitehouse complex appears to date from the late-C18 (the cone appears on a 1785 map of the adjoining canal) and by 1839 (Tithe Map) had been extended with a building alongside the canal, to the west of which was a separate flour mill. By the 1880s the Whitehouse site included the cone with a range of ancillary structures to the north and west; there was a building along the road frontage and another alongside the canal and the flour mill had been extended. Part of the mill was destroyed by fire in 1896 and it was presumably this that led to the construction of the present buildings in various phases at the beginning of the C20. Stuart & Sons acquired the lease of the site in 1914 and subsequently purchased both it and the Redhouse complex (which it had leased since 1881), including the flour mill, which was later incorporated within the glass works. The Newhouse furnace was constructed c.1925 and in 1934 a large glass works factory was added to the west of the mill, later expanding to the east until it eventually abutted the mill. The Whitehouse cone was partly demolished and capped in 1940 and its above ground remnants removed in 1970. Glass manufacture, which in latter years took place entirely within the post-1934 factory, finally ceased on the Whitehouse site in 2001.

This group of buildings has strong group value with other designations on the site including the separately listed group to the west, the Grade II* Redhouse Cone and scheduling below Newhouse, Whitehouse Glass Cone and the Redhouse Cone. While of limited architectural value, the buildings have considerable archaeological, historical, social and technological significance. The Whitehouse complex has a strong visual and functional relationship with the Redhouse complex to the east of Wordsley High Street. This includes the Redhouse cone (q.v.), a structure of international importance and a prominent local landmark symbolic of the British glass industry. Together the two complexes, which were responsible for experimentation in and the development of many of the processes of glass manufacture (ranging from broad glass, bottle glass, cut glass, crystal glass to cameo, fancy and coloured glass ware) include evidence from the earliest phases of glass making in the Stourbridge area, through the Victorian and early-C20 industrial era to some of the most innovative post-war experimentation phases. The buildings that we are recommending are of therefore particular interest for their cumulative representation of technological changes in glass production over a wide period of time and on one site.