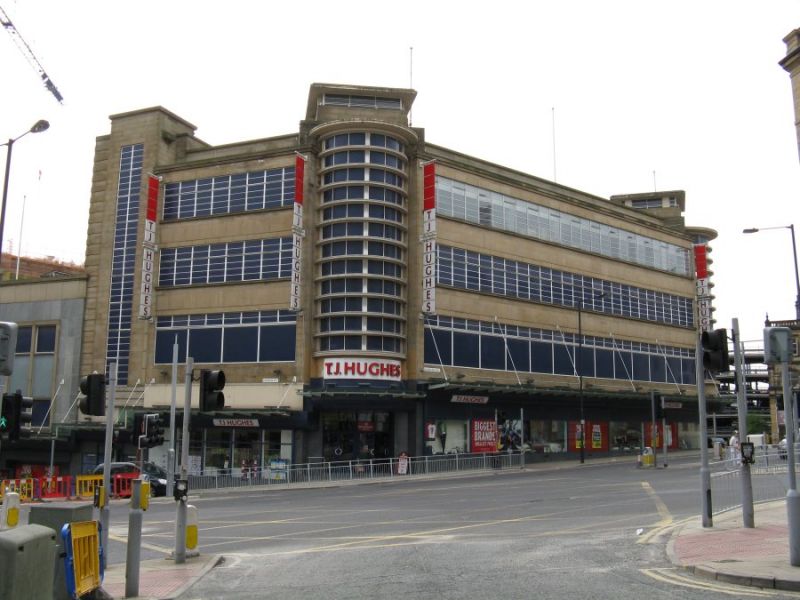 Also Known As: The Co-operative Emporium, GODWIN STREET
Department Store, 1935-6, W A Johnson & J W Cropper, for City of Bradford Co-operative Society. Steel frame construction with concrete-cased stanchions and girders. Brick walls faced with York stone. Asphalted reinforced concrete roofs, insulated with pumice concrete. 4 storeys plus 2 basement storeys, built on a sloping site, with an open-store principle interior plan. The slope of the ground allows ground floor access at the front, and light and access to both basement and sub-basement to the rear. All the windows are steel-framed Crittall style, with a small number of replacement plastic frames at the rear on the 4th floor.

EXTERIOR: main elevation has four storeys of alternate horizontal continuous glazed bands and stone facings, with large picture windows at ground floor, 2 over 1 metal-framed lights on 1st floor and narrowly banded metal frames above. These are broken by two semi-circular turrets, one at the left end and one halfway along Sunbridge Road front. These have glazed bands separated by projecting cills and are topped by low square towers set back from the facade. To the right of the right hand turret, the line of the frontage dog-legs back to accommodate the shape of the site. Main entrances under each turret. Right return has continuous glazed bands as at the front, broken to right of centre by a projecting bay containing a stair window of 3 triangular projecting elements forming a vertical sawtooth shape, from 1st to 4th floor height. To the right of this, one set of windows with entrance on ground floor below. Left return: as front, ending in a projecting bay with full-height metal-framed stair window above ground floor level. Beyond, later 3 storey extension in similar materials, but without the metal windows, and not of special interest. Rear: similar fenestration but with strong horizontal lines in intervening stonework. Loading bay to right.

Suspended green glass canopy, stepped to follow changes in ground level, above ground floor, of the same date as the extension.

INTERIOR: sub-basement level (not inspected) contains loading bays and storage. Basement level, originally stock rooms, now shop floor. Top floor, originally restaurant and offices, now offices and stock rooms. Other floors open shop space. Main staircase to the right of the right hand turret, in York stone with continuous brass handrail in Art Deco style, retaining curved panelled landings and some original glazed doors to shop floors, not now in public use. Public lifts at either end of shop with original stairs wrapped round them, those to the right having "concertina" stair window, now blocked off but retaining all original elements. To the rear are two original service lifts and a service staircase. Central escalators to all floors.

Architect W A Johnson worked for the Cooperative Wholesale Society from 1899 until 1950. He was heavily influenced by the German architect Erich Mendelsohn after 1930, evident in his embrace of the International Modernist style. Johnson travelled widely in Germany and Holland, and Mendelsohn's Sckoken store in Stuttgart (1928) is quoted as being a particular inspiration for the Bradford Co-op. The Dantzic Building and the CWS building in Manchester, are both by Johnson, and both are listed.

SUMMARY OF IMPORTANCE
This 1935 former Co-operative department store meets the criteria for listing on the grounds of its special architectural interest and its intact survival. It was designed by W. A. Johnson, the chief architect for the CWS who designed a number of commercial buildings in strong International Modernist style. The Bradford store was an early and influential example of the open store principle, with lifts and stairs tucked around the edges of the shopping area, and also had the first escalators to be installed anywhere in a Co-op store. Its unaltered appearance both externally and internally is extremely rare and its importance is recognised in written sources both contemporary and recent.